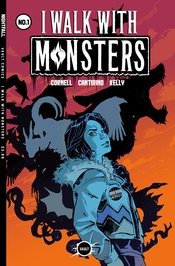 2020 keeps on giving with the irony of it being Local Comic Shop Day while we are in lockdown in the UK… Still there are at least some pretty cool special edition books being released – DC’s Future State #1 has a promo special one per store foil variant, while Boom give us foil variants of a host of titles (Something is Killing the Children #1, Power Rangers #1 and Dune #2). Similarly Image give us a foil Invincible #1 and an homage Ice Cream Man #21.

In Jacey’s past is the Important Man who took away her brother. Now Jacey has David, who sometimes transforms into a terrifying beast. Together, they’ve found a way to live to hunt, sniffing out men who prey on the vulnerable. But Jacey and David are about to run into the Important Man again in I Walk With Monsters #1 (Paul Cornell, Sally Cantirino).

We return to Heaven (and Hell) in UnSacred Volume 2 #1 (Mirka Andolfo), as Angelina and Damiano …and Eden, the new arrival in the family come back for more adventures.

Bridging the gap between the fifth and sixth arc (which resumes in January 2021), Monstress returns with Talk-Stories (Marjorie M. Liu, Sana Takeda), a two-part limited series that invites you to eat dumplings beside the fire and listen as Kippa recounts a defining moment from her childhood.

Aftershock’s new book this week mixes Ocean’s Eleven and Godzilla to answer the question of whether it is a good idea to pull off a heist during a monstrous attack in Kaiju Score #1. Then a life in crime has it’s consequences as one man finds out in Assassin And Son #1 (Shad Gaspard, Marc Copani, Elder Messiah), when he is forced into single-parenthood after his wife is murdered and he and his son want revenge.

Curse your sudden but inevitable betrayal! It’s Wash’s turn to shine in Firefly: Watch How I Soar (Various), and after the mind-bending destruction of the Black Barn, our heroes find themselves spread across the multiverse that it contained within in Gideon Falls vol. 5 (Jeff Lemire, Andrea Sorrentino, Dave Stewart)

Collected for the first time, Girl (Peter Milligan, Duncan Fegredo) is under-the-radar story of ’90s teenage ennui, and Juliet Takes A Breath Gabby Rivera (A/CA) Celia Moscote()is an unforgettable queer coming-of-age story exploring race, identity and what it means to be true to your amazing self.

Revisit the classic comic Barbarella (Jean-Claude Forest, Kelly Sue DeConnick) this week as the sci-fi heroine gets an all new translation from KSD. Speaking of scifi, Conan heads to the bright lights of… Las Vegas? Find out how and why in Conan: Battle for the Serpent Crown (Saladin Ahmed, Luke Ross).

The grand finale! The big finish! The climax! We speak of course about this, the end of the award-winning, boundary-pushing, taste-challenging Sex Criminals vol. 6 (Matt Fraction, Chip Zdarsky). Meanwhile, Erica Slaughter may have slain the monster terrorizing the small Wisconsin town of Archer’s Peak, but the horror is far from over in Something Is Killing The Children vol. 2 (James Tynion IV, Werther Dell’Edera)

It’s the Tenth Doctor against the Daleks in the trade collection of Doctor Who: Time Lord Victorious (Jody Houser, Roberta Ingranata). Meanwhile East of West: The Apocalypse Year Three (Jonathan Hickman, Nick Dragotta) is an oversized prestige collecting 15 issues of the popular series. Sticking with the apocalyptical naming theme, also out this week is a hardcover of the soon-to-be-given-the-Netflix-treatment The End of the F***ing World (Charles Forsman) about a sociopathic teen taking a road trip.

A teenager who is destined to be a human sacrifice at the Gate of Darkness is on the run from the Angel sent to kill her in Ever: The Way Out (Terry Moore) a self-contained story hitting the shelves this week.

Continuing the story from the Nickelodeon animated series, Avatar: The Last Airbender omnibus (Gene Luen Yang, Michael Dante Dimartino, Bryan Konietzko, Gurihiru) sees Aang get the gang back together to try stop a war between the Fire Lord and the Earth King. Meanwhile the World’s Grumpiest Cat-and the world’s most adorable internet sensation-continues to delight fans of all ages, in Grumpy Cat: Awful-ly Big Comics Collection (Various)

DC are sniffing around for the “longest title of the week” award again, with this weeks new release Dark Nights: Death Metal: The Multiverse Who Laughs #1 – now that the Multiverse has been destroyed, the Batman Who Laughs has used his god-like power to create a new Dark Multiverse — a collection of 52 evil worlds, each more terrifying than the last.

Other History of the DC Universe #1 (John Ridley, Alex Dos Diaz) follows the story of Jefferson Pierce, the man who will one day become Black Lightning, as he makes his way from being a young track star to a teacher and, ultimately, to his role as a hero

How does a hero deal with PTSD and the terrible things they have seen and done? Find out in Heroes In Crisis which collects the entire nine issue min-series. Sticking with crises, our intrepid reporter has to choose between the truth and… everything else really, in Lois Lane: Enemy of the People (Greg Rucka, Mike Perkins)

Power Pack #1 (Ryan North, Nico Leon) is back! Katie, Julie, Jack and Alex Power have been super-heroing since they were learning to tie their own shoes. It’s been ages since they fought side by side as a family, but a special occasion – and an old grudge – is about to put the gang back together.

The wheel of fortune turns. The unfortunate fall.
A sword against the darkness. X Of Swords: Destruction #1.

Oz: The Complete Collection (Eric Shanower, Scott Young) sees Dorothy Gale on another adventure, and this time she’s joined by the Shaggy Man, with his handy-dandy love magnet, and Button-Bright, the wisest little boy who “don’t know” anything.

For Manga fans we have Destiny Lovers vol. 1 (Kazutaka, Tomohiro) in which a young man is kidnapped and thrown into a prison staffed by seductive ladies! There is also Granblue Fantasy vol. 7 (Cygames , Cocho), and White Cats Revenge Plotted Dragon Kings Lap (Yamigo Kureha, Aki) in which a girl is transported to another world and turned into a cat!

The Hellsing Organization is under siege by the undead Nazi army of the Millennium Project, who are turning the London streets into rivers of blood in Hellsing: Deluxe Edition vol. 2 (Kohta Hirano)

Learn to draw original anime characters with accurate emotions that capture the mood of a character and tell a story in Drawing Anime Faces and Feelings (Studio Hard Deluxe).