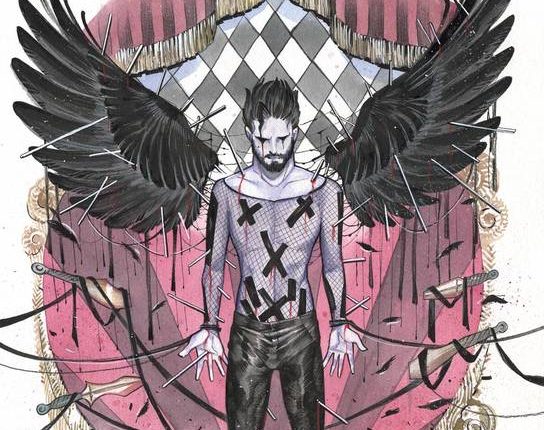 It’s another week of lockdown but don’t fret, there are some awesome – and super positive – titles coming out this week, and with names like A Dark Interlude and Sea of Sorrows they’ve sure to keep you smiling. Um… anyway.

The superhero series told from the perspectives of Joe Public continues this week with Marvel Snapshots: Avengers #1 (Barbara Randall Kesel, Kurt Busiek, Staz Johnson) and a meet-cute between two first responders gets the Tony Stark treatment… what could possibly go wrong with that?

Widowmakers: Red Guardian and Yelena Belova #1 (Devin Grayson, Michele Bandini) featuring the red room recruit who thought she would inherit the Black Widow title, and the man who is tired of waiting in Natashas shadow. Meanwhile Knull is up to his new old tricks again, in tie-in to the next event Symbiote Spider-Man?: King In Black #1 (Peter David, Greg Land) in which you can witness one of Knull’s earliest attempts at birthing life from the darkness of non-creation!

The best is back! Wolverine has been through a lot. He’s been a hero and a killer. An X-Man and an Avenger. He’s been to hell and back. Now, as the nation of Krakoa brings together all mutantkind, can he finally be…happy? Wolverine finally has everything he ever wanted – and everything to lose. Find out more in this latest installment of his story; Wolverine (Ben Percy, Viktor Bogdanovic, Adam Kubert).

When the united Kree/Skrull army targets Earth, Captain America sends out a call for heroes in Empyre: Captain America and the Avengers trade paperback (Philip Kennedy Johnson, Jim Zub, Ariel Olivetti, Carlos Magno) and Hulklings destiny catches up with him in Lords of Empyre (Chip Zdarsky, Anthony Oliveira, Alex Paknadel, Gerry Duggan, Manuel Garcia, Alex Lins, Thomas Nachlik, Greg Smallwood). Catch up now on the event of the summer that changed the Marvel universe forever. Like, for real this time!

Battle Royale, but make mine Marvel: the Avengers Arena complete collection hits the shelves this week (Dennis Hopeless, Christos Gage, Kev Walker, Alessandro Vitti, Riccardo Burchielli, Karl Moline). Meanwhile the new nation state of Krakoa means that all past sins are forgotten, so obviously Mr. Sinister is going to make the most of things with his new team of Hellions (Zeb Wells, Stephen Segovia).

Have you ever danced with the devil in the pale moonlight? I mean I like a good boogie as much as the next person but it’s probably best you haven’t… Anyway if you prefer more indoorsy, less risky, pursuits why not curl up with the Three Jokers hard cover (Geoff Johns, Jason Fabok), and find out why the question isn’t as simple as “who is the Joker” because as they say, these things come in threes…

A ragtag group of heroes band together to take on the forces of Darkseid in Justice League Odyssey vol. 3, and for younger readers there is the story of how the Boy Wonder became well, the Boy Wonder, in DC Super Heroes Origins: Robin (Michael Dahl). Wonderful.

In the aftermath of the Great War, the North Atlantic is ripe for plunder by independent salvage crews. When a former naval officer hires the SS Vagabond, he leads the ship to a sunken U-boat, and a fortune in gold. Tensions mount as the crew prepares to double cross each other, but the darkness of the ocean floor holds deeper terrors than any of them have bargained for in Sea of Sorrows #1 (Rich Douek, Alex Cormack), and with a title like that it’s going to be a fun ride for sure!

After the stunning success of Fearscape, comes the story of… well you’ll just have to find out in A Dark Interlude (Ryan O’Sullivan, Andrea Mutti) because Henry Henry doesn’t like synopses…

A groundbreaking new sci-fi action series in the world of the Eisner Award-winning Black Hammer universe, about prejudice, honor, and identity. Mark Markz has found his place on Earth as both a decorated police officer and as the beloved superhero in Barbalien #1 (Tate Brombal (A/CA) Gabriel Hernandez Walta). But in the midst of the AIDS crisis, hatred from all sides makes balancing these identities seem impossible-especially when a Martian enemy from the past hunts him down to take him back, dead or alive.

In Children of the Grave #1 (Sam Romesburg, Ben Roberts, Gioele Filippo) the earth is a newfound paradise, with all your needs catered for by the Providers, and the past forgotten. But some people just want to watch the world burn, and Daniel is determined to find out the truth…

Can The Doctor save Christmas? We hope so because otherwise this year really will be The Worst. Find out more, and also whether Santa is a Time Lord or not, in Doctor Who: 13th Doctor Holiday Special collection (Jody Houser, Roberta Ingranata, Enrica Eren Angiolini). Speaking of The Doctor, after narrowly escaping the Weeping Angels and the Autons in 1960s London, the Tenth and Thirteenth Doctor must team-up once again to save present-day Earth from being overrun by the classic aquatic villain, the Sea Devils, in Doctor Who Comic #1 (Jody Houser, Roberta Ingranata)

Have you ever wondered about the friends of a passive-aggressive karaoke singing red panda? Well wonder no more, just read Aggretsuko and Friends #1 (Cat Farris, Lisa DuBois), which focuses on the yoga teacher because how can one indivdual be so flexible AND so positive?!

Buffonery! Jollity! Meat suits! The aristocrats of ludicrous! Defending reality from the encroaching forces of boredom while having a nice time in The Ludocrats (Kieron Gillen, Jim Rossignol, Jeff Stokely, Tamra Bonvillain), and just in time for Christmas, the oversized deluxe hardcover Papergirls vol. 3 (Brian K. Vaughan, Cliff Chiang, Matt Wilson) collects the emotional final adventures of four time-traveling newspaper delivery girls, risking everything in the hopes of making it back home to 1988. Which actually seems like quite a good idea right now.

A science fiction author knows more than he should, and he might just hold the key to reality in Bang vol. 1 (Matt Kindt, Wilfredo Torres), which tells the story of a superspy with memories he shouldn’t possess, a mystery writer in her eighties who spends her retirement solving crimes and more, all connected to one man.

The last remnants of humanity are housed in a massive domed city powered by renewable energy and one bioengineer could hold the key to their survival – but will sibling rivalry get in the way of the rebuilding of Earth? Check out No One’s Rose vol. 1 (Emily Horn, Zac Thompson, Tim Daniel, Alberto Jimenez) to find out more.

Archie vs Predator II (Alex De Campi, Kelly Fitzpatrick, Robert Hack) really doesn’t need an explanation does it? I hope not, because that’s all your getting on this one! Meanwhile the hunters are headed to the jungles of Central America in Predators Hunters III (Chris Warner, Brian Thies).

Null Narcos is a popular performer in a freakshow, able to endure horrific violence on his body without pain. But outside his nightly shows, Null is a blank slate, with only faint but disturbing memories of who he was before – and how does his life link to the Crow? Find out more in the trade paperback The Crow: Lethe (Tim Seeley, Ilias Kyriazis).

For Sherlock fans this week we have Moriarty: The Patriot vol. 1 (Sir Arthur Conan Doyle, Ryosuke Takeuchi, Hikaru Miyoshi) in which a Noble family adopts two lower-class orphans who cement young Albert James Moriarty’s hatred of the nobility, and he begins a plot to rid the world of evil with the help of one of the boys.

In a world where magic rules from the shadows, there exists a school for witches. This mysterious academy trains young witches on a path of revenge against those who have used them only as tools. Alice, a magical prodigy, has lived her life by this goal only to have her world turned upside down when Mari, a magic-less human, enters the school and her heart in Witches Love At The End Of The World vol. 1 (Kujira)

Denji’s a poor young man who’ll do anything for money, even hunting down devils with his pet devil-dog Pochita. He’s a simple man with simple dreams, drowning under a mountain of debt. But his sad life gets turned upside down one day when he’s betrayed by someone he trusts. Now with the power of a devil inside him, Denji’s become a whole new man – Chainsaw Man (Tatsuki Fujimoto)!

The Demon Slayer Corps plunges into Infinity Castle to confront Muzan. Shinobu engages in a fierce fight against Doma, the Upper Rank 2 demon in Demon Slayer Kimetsu No Yaiba vol. 17 (Koyoharu Gotouge), and you can imagine waking to a world where every last human has been mysteriously turned to stone…One fateful day, all of humanity turned to stone. Many millennia later, Taiju frees himself from the petrification and finds himself surrounded by statues, and his story continues in Dr Stone vol. 14 (Riichiro Inagaki, Boichi)

The stranded students face an internal power coup, a wasteland monster with a voracious appetite and a plague in The Drifting Classroom vol. 2 (Kauzo Umezz) and the creator of Fairy Tail, is back with a high-flying space adventure! All the steadfast friendship, crazy fighting, and blue cats you’ve come to expect… IN SPACE! Edens Hero vol. 9 (Hiro Mashima) takes to the stars for another thrilling saga!

Meanwhile Natsu, Lucy, Happy, Erza, and the whole Fairy Tail guild are back in action in Fairy Tale: 100 Years Quest vol. 5 (Hiro Mashima, Atsuo Ueda), and the curtain rises on the big battle between the Monster Association and the heroes in One Punch Man vol. 21 (One, Yusuke Murata).

One day, Miko suddenly started seeing grotesque beings that others couldn’t, and chose to ignore them. Can she keep it up in Mieruko-Chan vol. 1 (Tomoki Izumi)?