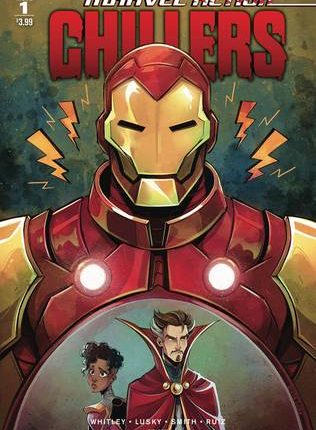 I’m not even sorry for that joke. But you’ll be sorry if you miss out on the breakout character of the year from DC Comics, spinning out of the The Joker War in an oversized issue giving the full backstory of Alexis Kaye, following her on a harrowing journey from radicalisation as an outside teen to become the Joker’s latest squeeze, and the “anti-Harley Quinn”. Which sounds hilarious.

Lobo is back and not taking any prisoners in Dark Nights: Death Metal: Infinite Hour Exxxtreme #1 as he retells familiar DC tales, with extreme prejudice.

Step into a corner of DC history with The Forever People of Super Town (Jack Kirby) and meet a group of young, otherworldly adventurers: Big Bear, Mark Moonrider, Serifan, Beautiful Dreamer, and Vykin, five young heroes who, with the help of their mother box, have the ability to summon the mighty Infinity Man.

For younger readers from DC this week there is Batman and the Missing Punchline (Michael Steele, Gregg Schigiel), but seeing as we’ll have copies of Punchline #1 on the racks I don’t see what the problem is? Anyway next up there is Wonder Woman and the Cheetah Challenge and there is chaos at the Global Village theme park.

Then there are some history lessons to be had, as both DC Superheroes Origins: Cyborg (Matthew K. Manning) and DC Superheroes Origins: Supergirl (Steve Brezenoff) hit the racks. Finally for younger readers there is Teen Titans Go: Roll With It in which the Titans have a regular game of Basements and Basilisks, but Robin comes in and makes it almost impossible to win.

The Avengers are threatened by an ancient evil this week, and it’s up to Dr Strange and Ironheart to try and save them, before it is too late… follow their progress in Marvel Action Chillers #1 (Jeremy Whitley, Sweeney Boo).

Next up on Dave, it’s Taskmaster #1 (Jed MacKay, Alessandro Vitti). Five minor celebrities will be given the task of finding out who actually murdered Maria Hill and won’t stop until Taskmaster is dead or clears his own name! Some or all of this synopsis may be true.

I do know a bad rhyme about the Thunder God but I’ll spare you the worst of it, and instead tell you to check out Thor vol. 1 (Donny Cates, Nic Klein), and there is peace in the Realm Eternal which I’m sure will last.

The Empire has struck back, the rebel fleet is scattered, and Luke is suddenly realising that he has a future of terrible dad jokes ahead of him – Star Wars: Destiny Path (Charles Soule, Jesus Saiz).

Two new series, two new teams, all the action and adventure you’d expect from Power Rangers #1 (Ryan Parrott, Francesco Mortarino)! Meanwhile, Harry’s learned a lot about himself and the possibility that other aliens have been stranded on Earth in Resident Alien: Your Ride’s Here #1 (Shaun Simon, I.N.J. Culbard)

Hop into a pile of leaves with Archie and Friends Fall Festival #1 (Various) for this autumnal collection of stories! Sticking with the chilly theme is Dungeons and Dragons: At The Spine of The World  #1 (AJ Mendez, Aimee Garcia, Martin Coccolo) as a band of adventurers take on a perilous journey.

What do you get when you cross Tomb Raider with The League of Extraordinary Gentlemen? A brand new title, Cutting Edge: Siren Song #1 (Francesco Dimitri, Mario Alberti). Speaking of crossovers, Kick Ass Vs Hit Girl #1 (Steve Niles, Marcelo Frusin) sees friends become enemies – but I bet they don’t destroy half a city in the process!

How many wives does it take to screw up a Hellboy? Find out in Hellboy and the BPRD: The Seven Wives Club (Mike Mignola, Adam Hughes) a new one shot from two classic creators. Meanwhile in Hellwitch: The Forsaken #1 (Brian Pulido, Mike MacLean, Diego Bernard) our leading lady has become Hell’s most notorious rebel, with a price on her head to match.

Finding an alien creature with limitless comic powers would be enough to turn even the sanest of heads, but when three teenagers – each outcasts in their own way – encounter a baby alien in the woods, they are easily susceptible to the draw of it’s power. Find out why with great power comes great… well, you’ll find out in Alienated (Simon Spurrier, Chris Wildgoose).

A former member of the military, enhanced with expensive-to-maintain tech, takes on one last job to pay her debts. But anyone who has ever seen a  Hollywood blockbuster knows, “one last job” never goes to plan. Find out how badly it can go in Madi: Once Upon A Time In The Future (Duncan Jones, Alex Di Campi). Similarly titled but wholly different is Once and Future vol. 2 (Kieron Gillen, Dan Mora), in which Duncan and his arse-kicking Grandma Bridgette are headed off on more adventures, and this time it’s all kicking off in the British Museum.

There are Twelve Reasons To Die (Ghostface Killah, RZA, Matthew Rosenberg, Patrick Kindlon, various) coming in from the Wu-Tang Clan this week, which isn’t a hyper-violent remix of a Paul Simon song, but the tale of a crime boss’ rise and fall. Also, did you know that two arks were built to survive the Flood? One was filled with the creatures of the natural world. The other was populated by…everything else. Find out more about the “other” in Dark Ark: After the Flood vol. 1 (Cullen Bunn, Jesus Hervas, Juan Doe)

Welcome to Billionaire Island (Mark Russell, Steve Pugh), where anything goes… if you can afford it. But the island’s ultra-rich inhabitants are about to learn that their ill-gotten gains come at a very high price. Speaking of high prices, there is always a price to pay for the Slayer. Find out what that is in Buffy the Vampire Slayer: Chosen Ones (Jordie Bellaire, Eleonora Carlini).

There is a new deluxe hardcover edition of Mighty Morphin Power Rangers: Beyond The Grid (Marguerite Bennett, Simone Di Meo) landing on the trade shelves this week, and there is also a new full colour edition of Please Destroy My Enemies (Michael Sweater) a collection of 60 daringly ironic and awful comics.

With the age of heroic star pilots and galactic villains completely killed by quantum teleportation, the ex-star pilot currently named Dashford Pierce is struggling to find his identity in a changing universe and Will Destroy Galaxy For Cash (Yahtzee Croshaw)

After the death of its adopted leopard mother, an orphaned baboon wanders the wild in search of companionship and a sense of identity in Baboon (Pau) and to survive after crash landing on an alien planet, a vacationer must battle against a hostile environment, killer lizards, corporate bureaucracy, and the pessimism of her sole companion, the drug-addled captain of the ship in Planet Paradise (Jesse Lonergan).

For younger readers, we have The Courageous Princess vol. 3 (Rod Espinosa) the conclusion to the trilogy, Princess Mabelrose must use her generous spirit, as well as her brains, to melt the heart of the Dragon Queen and gain her freedom. Then there are scares a’plenty in Goosebumps: Creepy Crawley Comics (Jen Vaughn, Jeremy Lambert, Denton J. Tipton, Matthew Dow Smith, Michelle Wong, Chris Fenoglio), which features 3 original stories.

The Seven Lives of Alejandro Dojo is a journey through Jodo’s personal life, his life in the theater, his rebirth as a 70s cinematic cult figure and of course, his work on Dune, the unfinished masterpiece.

Then for Manga fans Shogo and friends continue their search for the spell that will bring his little sister back to life in Final Fantasy: Lost Stranger vol. 5 (Hazuki Minase, Itsuki Kameya), and finally Yuuna and the Haunted Hoy Springs vol. 11 (Tadahiro Miura) Yuuna’s talisman wears off, leaving her suddenly invisible in the middle of a performance at a music festival!