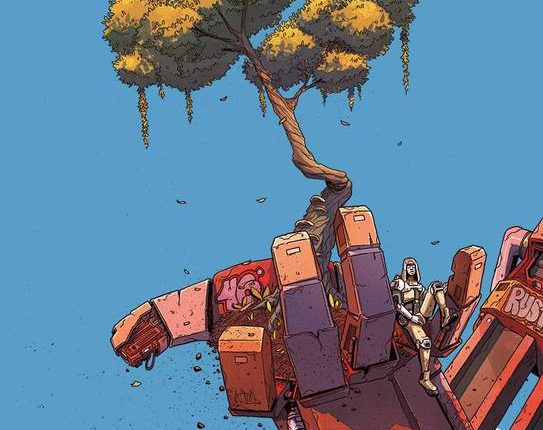 There are plenty of new titles to sink your teeth in to this week, starting with epic new Vault title Giga #1 (Alex Paknadel, John Le), which is the story of a world in which giant mechs used to wage war across the land but have long fallen dormant, becoming both habitat and god to humanity. However society and the fascistic tech-centred religious order that controls it are rapidly thrown into chaos when one disgraced former technician finds something he shouldn’t…

Trip-trapping on to the racks next is Grit #1 (Brian Wickman, Kevin Castaniero), and when a routine troll hunting gig takes a gruesome turn, Old Man Barrow finds himself in the company of a wannabe doomsday cult. Just how’s he going to get out of this backwoods nightmare?

You can enter a world of very Grimm fairy tales in Rick and Morty: Ever After #1 (Sam Maggs, Sarah Stern) when the titular pair accidentally fall into a book of stories and end up being the main characters.

The last remaining hero in a half shell goes on an epic quest for revenge in Teenage Mutunt Ninja Turtles: The Last Ronin #1 (Kevin Eastman, Peter Laird, Tom Waltz, Esau Escorza, Issac Escorza), a new 10 part mini series that is a must for TMNT fans.

The last remaining human, trapped on a world of demons, monsters and ghouls must investigate a murder whilst keeping his own secrets hidden in Sympathy For No Devils #1 (Brandon Thomas, Lee Ferguson).

Two troubled teenagers discover they can manipulate emotions by firing Finger Guns (Justin Richards, Val Halvorson). There will be laughs. There will be tears. There will be uncomfortable teen feelings and angst. Oh yeah… and chaos. So much chaos. Then it’s copy-serial killer time in Nailbiter vol.7 (Joshua Williamson, Mike Henderson, Adam Guzowski) when Sheriff Crane is missing and it looks like Nailbiter is back…?

How far would you go for your art? One musician sees how far into the dark places his talent will take him in Blue In Green (Ram V, Anand Rk), and you can hop on board the train to nowhere in Snowpiercer vol. 2 (Matz, Jean-Marc Rochette) the hardcover collection of stories that precede the hit movie and TV show about a train that travels perpetually around the globe with the last remains of humanity on board.

It’s a double creature feature as we see The Dark Crystal Bestiary (Adam Cesare, Brian Froud) – which is the definitive in-depth exploration of the flora and fauna found in the world of Thra, and The Dark Horse Book Of Monsters (Various) – a Hellboy based romp through the world of the weird.

Don’t blink! Or you might miss Doctor Who: A Tale of Two Time Lords (Jody Houser, Roberta Ingranata) in which the 10th and 13th Doctor team up to take on the Weeping Angels! Speaking of TV tie-ins, Power Rangers: Sins of the Future (Matthew Erman, Trey Moore, Giuseppe Cafaro) is an all-new graphic novel set after the events of the hit Power Rangers: Time Force television series that features two of the most popular Rangers of all time!

Legendary comics artist Druillet brings his classic baroque, psychedelic vision to life once again in the Lone Sloane: Chaos (Philippe Druillet) masterpiece edition, and No-Name, the very last of the Metabarons, must save the galaxy from a new Techno regime that has risen to power in Metabarons: Second Cycle (Jerry Frissen, Alejandro Jodorowsky, Valentin Secher, Niko Henrichon)

The Encyclopedia Lumberjania (Susan Coiner-Collier, Kaiti Infante, Kanesha C. Bryant, Julia Madrigal) is an essential for the hardcore lady-type in your life, and A Quick and Easy Guide to Consent (Isabella Rotman) is an important educational comic guide to giving and receiving consent in sex, relationships, and other physical contact.

Both volumes of the tales of Sherlocks younger sister are now available, as Enola Holmes: The Case of the Missing Marques and Enola Holmes: The Case of the Left Handed Lady (Serena Blasco) both land in the all ages section this week. Also for younger readers this week are The Magical Adventures of Phoebe and her Unicorn (Dana Simpson) and Max Meow: Cat Crusader (John Gallagher).

Latest in the horror series Just Beyond… is Welcome To Beast Island (R. L. Stine, Kelly Matthews) and frankly with a name like that you should know better than to visit!

An intergalactic event that will reshape the Marvel Universe, Empyre (Al Ewing, Dan Slott, Pepe Larraz, R. B. Silva, Valerio Schiti, Sean Izaakse) features Avengers, the Fantastic Four, the Kree and the Skrulls all pitted in an intergalactic battle the likes of which have never been seen before!

Then Riri Williams steps boldly out of Tony Stark’s shadow to forge her own future in Ironheart: Meant To Fly (Eve Ewing, Luciano Vecchio, more), and what if Gwen Stacy was bitten by the radioactive spider, not Peter Parker? Find out in Spider-Man: Into The Spider-Verse: Spider-Gwen (Jason Latour, Robbi Rodriguez).

Read the stories of Old Ben in Star Wars: From The Journals of Obi-Wan Kenobi (Jason Aaron, Dash Aaron, Simone Bianchi, more) which features a cast of fan favourite characters.

This weeks award for longest title has to go to Dark Knights Death Metal: Rise of the New Good #1 in which Perpetua has an unusual ally in her battle against the Batman Who Laughs.

In The Last God: Songs of Lost Children #1 (Dan Watters, Steve Beach), an incognito Queen Cyanthe and her handmaiden embark on a journey to the poverty-stricken villages, only to be  faced with stories of disappearing children and a real-life encounter with a great and ancient monster.

Yuzu-sensei has a reward she wants to give Shota – in her bedroom – in Worlds End Harem: Fantasia vol. 3 (Link, SAVAN)