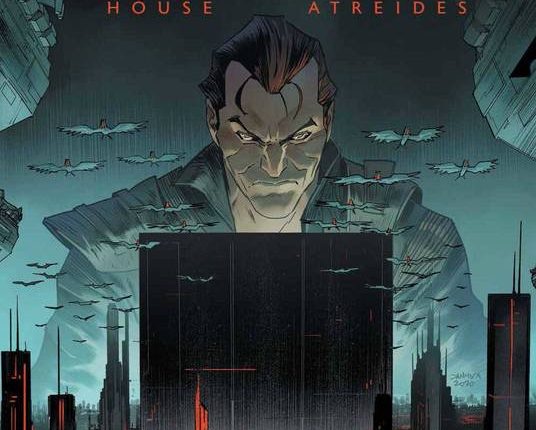 It’s a pick and mix kind of a week for new titles and trades, so lets jump right in and see what’s on offer for readers old and new…

With a utility belt filled to the brim with weapons designed to kill every hero in the DCU, Robin King #1 is the most sadistic soldier in the Darkest Knight evil army! But will this new title answer the most important question of all – does he have shark repellent?

Meanwhile Dr Quinzel’s alter ego is working on the right side of the law for once in Batman: White Knights Presents: Harley Quinn #1, but not everyone is pleased about, not least Commissioner Montoya.

Can Norrin Radd survive being sucked into a black hole? Find out in Silver Surfer Black (Donny Cates, Tradd Moore) as the former Herald of Galactus goes on a mission to retain the power cosmic.  A group of teenagers find out that their parents are a secret cabal of super-villains, and take matter into their own hands in the reprint of Runaways vol. 1 (Brian K. Vaughan, Adrian Alphona).

A young man, a family curse, and an unholy experiment prove a dangerous combination for a small town in Arizona, as Werewolf by Night #1 (Taboo, Benjamin Jackendoff, Scott Eaton) drops. Although it begs the question, does this mean there is also a werewolf by day?

Welcome to Spice World! The biggest indie release this week is a prequel to a scifi classic novel, and soon to be release movie remake, in the form of Dune: House Atreides (Brian Herbet, Kevin J. Anderson, Dev Pramanik), and we also have Edgar Allen Poe’s Snifter of Blood (Paul Cornell, Dean R. Motter, Dean R. Motter, Russell Braun) which gives us the retelling of three classic Poe stories, with a sarcastic modern twist.

A female Viking warrior (yes, they’re a thing) turns a raid to her own favour in Assassins Creed: Valhalla: Song of Glory (Cavan Scott, Martin Tunica), the precursor to the new ubisoft game.

If you wanna be his lover, you’d better… well, just turn up really? Maybe bring beer? Ernie Ray Clementine, a profane, illiterate, drug-addicted biker with a fifth-grade education, and the fate of the world rests in his hands, in Scumbag #1 (Rick Remender,Moreno DiNisio, Lewis LaRosa). What could possibly go wrong?

It’s time for Old Spice in King Tank Girl #1 (Alan Martin, Brett Parson) as we got back to the start of her adventures for some untold tales, and from the world of The Chilling Adventures of Sabrina there is the Madam Satan (Eliot Rahal, Julius Ohta) one shot, in which she takes on the lord of Hell, to prove herself to be the most powerful being of the Underworld.

Scary story Spice! It’s Halloween night in Hawkins, Indiana and Will, Mike, Lucas and Dustin gather in Castle Byers to eat candy and scare each other with a spooky tale in Strangers Things: Halloween Special (Michael Moreci, Todor Hristov).

The first volume of The Sandman (Neil Gaiman, Matt Wagner, Sam Kieth, Mike Dringenberg, Chris Bachalo, Michael Zulli, Teddy H. Kristiansen, Dave McKean) is collected for the first time in a deluxe edition this week, with the start of Morpheus epic journey to regains items lost during his 70 year imprisonment.

In Bitter Root vol. 2 (David Walker, Chuck Brown, Sofie Dodgson, Sanford Greene) we return to the story of the Sangerye family, and monster-hunting has been  business for generations as they battle hideous creatures born out of hate and racism. Speaking of roots, Family Tree vol. 2 (Jeff Lemire, Phil Hester, Eric Gapstur, Ryan Cody) continues the arboreal family saga, as Grandpa Judd and Meg continue to battle their inner demons.

Giant Days (John Allison, Max Sarin) is going to stop (right now, thank you very much) Daisy and Esther are set to graduate in the final volume, and Susan is there to cheer them on, but this epic series couldn’t end without some more Sheffield shenanigans, could it?

Nightly News vol. 1 (Jonathan Hickman) is a tale of media and revolution, with a cult leader pulling strings behind the scenes, and three strangers entangled by fate, coincidence, and cruelty find themselves at the end of the longest night of their lives, bound together against dark forces in November vol. 3 (Matt Fraction, Elsa Charretier)

There’s a new kid in town turning heads and gaining followers in Archie and Katy Keene vol. 1 (Mariko Tamaki, Kevin Panetta, Laura Braga), and who does she think she is?! An awkward outsider discovers the reasons behind her unusual life in Invisible Differences (Julie Dachez, Mademoiselle Caroline).

Living undercover as a semi-retired, small-town doctor, a stranded alien’s only hope is to stay off humanity’s radar until he can be rescued, but nothing is ever that easy and a murder in town propels him into the world in the Resident Alien omnibus (Peter Hogan, Steve Parkhouse). All bets are off when everyone wants a piece of the newly discovered alien spaceship in Siberia, in Starship Down (Justin Giampaoli, Andrea Mutti).

We see the return of Aang and friends in Avatar: The Last Airbender vols. 12 and 14 (Gene Luen Yang, Gurihiru), as they face off against the mad sister of Fire Lord Zuko and their own past… In Papaya Salad (Elisa Macellari) we get a different perspective on World War 2, as the Thai-Italian creator tells the story of her great-uncle who found himself in Europe on military scholarship on the eve of war.

The Phantom of the Opera (Varga Tomi), Gaston Laroux’s Gothic melodrama, gets a fresh retelling as a graphic novel adaptation of this literary classic, and Bad Machinery (John Allison) reprints the first three volumes of the much loved comedy series, in a pocket sized edition ready to introduce new readers to the peculiar English town of Tackleford. Read The Case of the Team Spirit, The Case of the Good Boy and The Case of the Simple Soul.

Smile (Raina Telgemeier) is one girls story of trying to fit in at school despite her dentists best efforts! Johnny Boo (James Kochalka) is the best little ghost in the world, and you can find out why as several new volumes hit the younger readers section this week.

Two becomes one as a stranded scientist gets his fill of animal/human hybrids in Creature Girls: A Hands On Field Journal In Another World vol. 1 & 2, and things are equally 18 rated in Saki the Succubus Hungers Tonight vol. 2 (Mikokuno Homare).