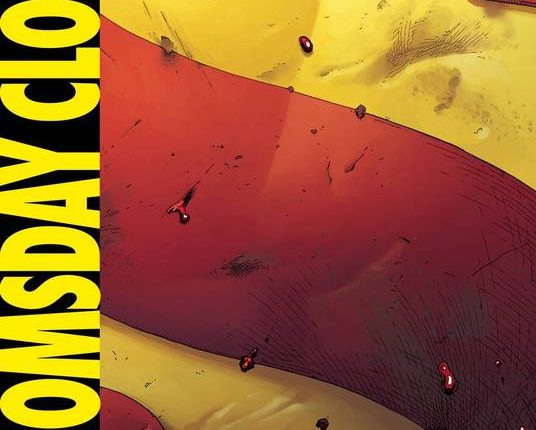 Hey there everybody, it’s time for our rundown of the new releases and trades that are hitting the racks at your local comic books shop this week! It’s another bit week for the indies, but there is a BIG release that we have to mention, because it’s been a long time coming…

The time has come! Doomsday Clock: The Complete Collection (Geoff Johns, Gary Frank, more) sees the Watchmen universe collide with that of the DC superheroes we all know and love, as fugitive Adrian Veidt follows the trail of the missing Dr Manhattan straight into the DC Universe – which is on the brink of collapse as international tensions push the “Doomsday Clock” ever closer to midnight!

Staying in the same world, it’s been 35 years since Ozymandias dropped a giant interdimensional squid on New York City, killing thousands and destroying the public’s trust in heroes once and for all (no, really). And since that time, one figure in a fedora, mask, and trenchcoat has become a divisive culture icon -and now he is back and trying to kill the President in Rorshach #1 (Tom King, Jorge Fornés)

Also out this week is The Flash vol. 12 (Joshua Williamson, Scott Kolins (A/CA) Rafa Sandoval, Jordi Tarragona) in which young Barry Allen gets lessons in how to be a hero from.. himself?

Tales of the macabre, the murderous, and the morbid abound in DCs The Doomed and The Damned (Various), a spine-chilling special about monsters and mayhem! Swamp Thing: Twin Branches (Maggie Stiefvater, Morgan Beem) is a story of shadows, both literal and imagined – and those that take form and haunt us.

Three of DC’s acclaimed graphic novels for young adults are collected in one brand-new box set: Mera: Tidebreaker, Under the Moon: A Catwoman Tale and Harley Quinn: Breaking Glass make up the DC YA box set.

Comics as we know it would not exist without one man, and his wit, wisdom and words are collection in a new printing of Stan’s Soapbox: The Collection (Stan Lee), in which columns from 1967 to 1980 are collected under one cover, and presented in a historical context, so you can immerse yourself in the flavor of the day, and get a sense what was happening right outside Stan’s window when he penned ’em.

Confused about the current mutant madness? Look no further than the X of Swords Handbook (Mike O’Sullivan, The Ohotmu Team), an all-new collection of X-Men-related profiles will bring you up-to-date on Apocalypse, Wolverine (Logan), Magik (Rasputin) and Meggan just in time for X of Swords! Hint – the X means ten.

Guardians of the Galaxy vol.1 (Al Ewing, Juan Cabal, more) sees the team of misfits once again returning to do the jobs than no-one else can. Except this time, Rocket is wearing… a suit? He’s been Bucky and Captain America – now, James Barnes returns to the role of the Winter Soldier (Ed Brubaker, Butch Guice, Michael Lark) in a new complete collection!

In the grim darkness of the far future there is only war… The saga of WARHAMMER 40,000 comes to Marvel Comics! Marneus Calgar #1 (Kieron Gillen,Jacen Burrows) is the legendary Chapter Master of the Ultramarines, and leads his elite Space Marines against humanity’s greatest threats in a galaxy engulfed in endless war. This new mini-series shows us his origin story for the first time, and is essential reading for 40K aficionados, as well as the perfect primer to the world of WARHAMMER 40,000 for those new to the universe.

DIE!NAMITE #1 (Declan Shalvey, Fred Van Lente, Justin Mason, Vincenzo Carratu) is an event series that unites all of the hit Dynamite characters as you’ve never seen them before! They will come together to battle the biggest threat they have ever faced. Many…are even missing faces!

Compassion has been murdered and it will take five disparate heroes from five different worlds to find the culprit in Commanders In Crisis #1 (Steve Orlando, Davide Tinto). Also in need of some compassion is the cop hunting a body-snatching murderer in Concrete Jungle #1 (Sheldon Allen, Karl Mostert), set against a backdrop of urban decay, exotic aliens, robots, and genetic mutations.

The True Lives of the Fabulous Killjoys: National Anthem #1 (Gerard Way, Shaun Simon, Leonardo Romero) reboots the Killjoys in present-day America, where it’s impossible to tell what’s real and what Mom and Dad just tell you to keep you calm. A group of vampires have spent year honing their skills and stealing human blood, but when a heist in 1941 Chicago comes to the eyes of an FBI agent, they discover that stealing blood is harder every day and with each decade that passes, Agent Franklin inches closer to the truth. The Vain #1 (Eliot Rahal, Emily Pearson) kicks off a series that spans nearly a century of wild eternal youth and reckless abandon across history.

In the year 2084 the earth is on the brink of desctruction and humanity will only survive at the whim of an alien race who offer to take 5000 children off planet. We Live #1 (Roy Miranda, Inaki Miranda) shows us the journey of Hototo, one of the lucky five thousand – but only if his teenage sister, Tala, can safely deliver him to the nearest Beacon before time runs out.

The adventures of Max, Chloe, and Rachel, from the hit game Life is Strange, continue into a new era, as time-rewinding photographer Max has spent the last couple of years in a reality parallel to her own. With the universe against her, it’s time for the coast-to-coast road trip of multiple lifetimes to find it  – following the band The High Seas towards an uncertain destiny in Life Is Strange: Partners In Time #1 (Emma Vieceli, Claudia Leonardi, Andrea Izzo)

Destined to be a Queen, and charged with keeping humanity safe, Carmine #1 (Colleen Douglas, Alvaro Sarraseca) already has a lot on her plate, and that without all the people that want her dead… Meanwhile The Devils Red Bride #1 (Sebastian Girner, John Bivens) is a blood-drenched love letter to Samurai fiction in a chilling tale of guilt, trauma, and vengeance.

There are two types of hero in the Land of High Adventure, the good ones and… the others. Meet two of the not-so-good-heros in Murder Hobo #1 (Joseph Schmalke, Jason Lynch), as they get recruited by accident and head off on a quest with a simple goal – keep all the loot for themselves!

Collected for the first time in one oversized edition, Jim Hensons The Dark Crystal: Creation Myths complete collection (Brian Froud, Brian Holguin, Joshua Dysart, Matthew Dow Smith, Lizzy John, Alex Sheikman) reveals the definitive origins of the Skeksis, Mystics, Gelfling, and the Dark Crystal itself while introducing all new characters in an epic spanning thousands of years. Meanwhile a Podling cook dreams of being a Paladin-and who discovers that sometimes it’s not always good when your wishes come true in Jim Hensons The Dark Crystal: Age of Resistance: The Ballad of Hup and Barfinnious (Adam Cesare, French Carlomagno)

Everyone knows the story of Eden, and of Noah and his Ark. But what happened in between? Enter a world of wanton cruelty and wickedness, murder and mayhem, in The Goddamned: Before The Flood (Jason Aaron, R. M. Guera)

The hosts of a ghost-hunting TV show find out that the afterlife is real when they end up killed by the spooks at a former penitentiary, and have to save their TV rivals and maybe the rest of the world, in Dead Dudes (Christopher Sebela, Ben Sears), and an aging starlet decides to raise more than just her dead career in Dracula Motherf**ker (Alex De Camp, Erica Henderson), a pulpy, pulse-pounding graphic novel of California psych-horror.

There’s a new slayer in Sunningdale and she’s not got time to mourn the last one, as Kendra takes on a world-threatening horror in Buffy The Vampire Slayer vol. 4 (Jodie Bellaire, Rosemary Valero-O’Connell). Speaking of horror, fancy entering a dusty old antique shop that moves through time and space? Look no further than The Electric Black vol. 1 (Joseph Schmalke, Rich Woodall).

Think you know the story of Theseus and the Minotaur? Think again, as Fire of Theseus (Jerry Frissen, Francesco Trifogli) puts a whole knew spin on things. Meanwhile Ripley is on a journey of self-discovery – with the help of a camouflaging zebracorn – in Lumberjanes: True Colours (Lilah Sturges, Polterink) the third and final standalone graphic novel set at Miss Qiunzella Thiskwin Penniquiqual Thistle Crumpet’s Camp for Hardcore Lady-Types.

Pilgrim Finch is an adventurous astronaut bear who explores the cosmos with a mission to bring samples of life back to his home planet in Space Bear (Ethan Young). But when he crash lands on a new planet full of surprises and danger around every corner, Pilgrim will be forced to question his orders and learn that there’s only one mission that matters – compassion to all living creatures no matter the stakes!

The dark pasts of Asirpa’s traveling companions are now coming to light, along with the secrets of her own father in Golden Kamuy vol. 17 (Satoru Noda). Held in a jail where the guards only want one thing – to take the prisoners virginity – the stakes get raised even higher for Fujishiro Kosuke in Destiny Lovers vol. 4 (Kazutaka, Kai Tomohiro), and finally for manga fans, Mob and friends have been captured in Mob Psycho 100 vol. 6 (One).