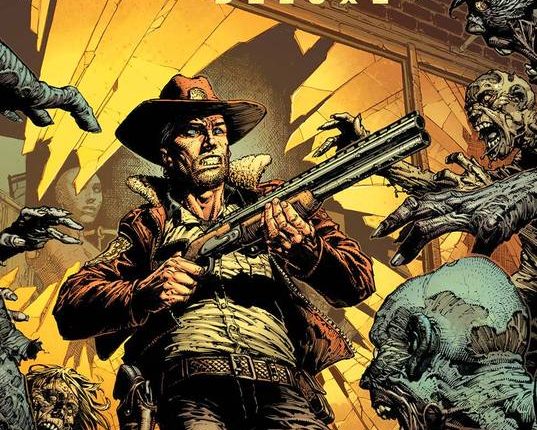 It’s October and that can only mean one thing – the horror books are coming out in force! Lets dive right in to the new releases and see what scares are in store…

This week sees the release of a small new indie title that might just be going places? The Walking Dead #1 (Robert Kirkman, Tony Moore, Dave McCaig) is a full colour zombie comic following Rick Grimes and his ragtag group of survivors as they try to battle through a brave new world filled with horrors, both undead and very much alive… This deluxe, definitive presentation of the story in full color will NOT be collected any time soon, so these single issues will be the only way to experience this.

It’s time for the monster mash (it’s a graveyard smash) in Archies Halloween Spectacular (Various), a collection of spooky-themed shorts, and there is also a 48 page anthology unloading the scares on a new generation from British horror fans in the form of Misty and Scream Halloween Special (Various). Plus what could the Decepticons possibly want with a flux capacitor? Find out in Transformers Back To The Future #1 (Cavan Scott, Juan Samu).

Skeletons are sure to come out of cupboards when the much anticipated  Getting It Together #1 (Sina Grace, Omar Spahi, Mx Struble, Jenny Fine) drops this week, and there is an adaptation of a hit book in the form of Norse Mythology #1 (Neil Gaiman, P. Craig Russell, Mike Mignola, Jerry Ordway), dropping tales of Odin, Loki and Thor.

War is a thing of the past, nations are irrelevant, and giant corporations rule the world. No, this isn’t a prediction for November, but the world of American Ronin #1 (Peter Milligan, Aco) in which highly skilled operatives conduct industrial espionage on a global scale, but one individual decides to try and take down the entire operation from the inside… America is broken. Trust between the government and the American public has crumbled. Paranoia reigns supreme. Again, not next month but 1976, and the return of Skinner Sweet in the final story that will conclude American Vampire 1976 #1 (Scott Snyder, Rafael Albuquerque) and tie up the generational story once and for all.

Spinning blue hedgehogs that collect golden rings? This isn’t a cheese-induced nightmare, but the latest game tie in comic in the form of Sonic The Hedghog: Bad Guys #1 (Ian Flynn, Jack Lawrence).

Year Zero (Ben Percy, Ramon Rosanas) wrestles with the weighty moral and theological questions posed by the pandemic and investigates its cause and possible cure. No, not that pandemic, but a global sickness causing zombies to spring up, and featuring the stories of five survivors of a horrific epidemic who must draw upon their unique skills and deepest instincts to navigate a world of shambling dead

Set on revenge, Dead Body Road (Justin Jordan. Matteo Scalera) is the story of one mans unusual – and violent – way of dealing with the death of his wife, and if your road trip takes you donw Route 66, maybe avoid a stay at Hotell (John Lees, Dakbor Talajic) because much like the one in California, many check in but few ever leave…

Get trapped in a house of horrors whilst on the run from border patrols and drug runners in Red Border (Jason Starr, Will Conrad), and explore the not-too-distant future and follow the entire blossoming relationship between a man and a sentient android in the Alex + Ada complete deluxe hardcover (Jonathan Luna, Sarah Vaughn), and there is a new digitally remastered print edition of much loved tale A Distant Soil vol. 1 (Coleen Doran).

Bigger and better than ever in a deluxe collector’s edition, this week you can pick up Slaine: The Horned God (Pat Mills, Simon Bisley)

What do a powerful psychic that can control 1/3 of the population of earth, and an FBI secretary have in common? Find out in Cognition (James Tynion IV, Eryk Donovan), a twisted scifi version of Mission Impossible that will keep you guessing to the end. A recoloured version of the essential story is now available in the form of Judge Dredd: America (Garth Ennis, various), in which the Judges are the law – but are the citizens happy about it?

Have you ever wondered what happened in between the first two seasons of Angel, the dark and brooding Buffy spinoff? Well wonder no more, as Angel legacy edition vol. 2 (Christopher Golden, Joss Whedon, various)  drop with all the story you could want! Speaking of angels, who about an angel with a machine gun? Sure, why not – Archangel 8 vol. 1(Michael Moreci, C. P. Smith)  gives us an all new spin on the judgement of Heaven.

There’s a new Netflix series coming, about superheroes facing trouble and strife in their private lives, but you haven’t travelled back in time to a pre-The Boys world, this is Jupiter’s Legacy (Mark Millar, Frank Quitely, Wilfredo Torres, Chris Sprouse, Walden Wong, Davide Gianfelice, Karl Story, Rick Burchett, Ty Templeton) and there a new editions of all four volumes of the story available this week, so that you can get in on the ground floor.

Genetic manipulation, paradox, alternative histories, and much more are included in Stairway (Various) a 128-page anthology of hard science fiction and genre stories. Speaking of hard, the second next installment of the Sunstone tie-in Swing vol. 2 (Matt Hawkins, Linda Sejic, Yishan Li) drops onto the top shelf this week.

A global disaster leaves hundreds of millions dead in its wake. Shortly after, a few thousand suddenly manifest superhuman powers. Are they harbingers of more perils to come? Find out in The Resistance vol. 1 (J. Michael Straczynski, Mike Deodato)

Things are hotting up in and out of the kitchen in Space Lunch Time Battle vol. 3 (Natalie Riess), and it’s all a little bit Casper as a new friendly ghost drops onto the racks in the form of Johnny Boo!  vol. 5 & 9 (James Kochalka), featuring silly tales perfect for bedtimes.

They’re not the heroes the world wants right now, but they are the heroes it needs – they’re The Champions #1 (Eve Ewing, Simone Di Meo), and Ms Marvel, Nova and Spider-Man aren’t here to play… Meanwhile Marvel Snapshots: Spider-Man takes you into the life of a henchman just trying to make a living in a world filled with web-slingers and worse.

So it turns out that actions have consequence, and they have a little more magnitude than the Merc with a Mouth was anticipating when he sets off to kill the King of the Monsters that has taken over Staten Island… find out how big in Deadpool vol. 1 (Kelly Thompson, Gerardo Sandoval, Chris Bachalo)

Don’t call them monsters… Pulling together the threads from across the X-universe (X-iverse?) is Dawn of X vol. 8 (Gerry Duggan, Stefano Caselli, more) which includes recent Marauders, New Mutants, Excalibur and more.

The Guardian of the Green has such tales to tell you, in Legends of the Swamp Thing: Halloween Special revealing past lives and the unforgettable horrors that befall those who cross his path.

There’s trouble in the cells in Deadlock vol. 2 (Saki Aida, Yuh Takashina), and a demon lord decides to break the mould in Dungeon Builder Labyrinth Modern City vol. 2 (Rui Tsukiyo, Yoshikawa Hideaki). It is grudge match time in Goblin Slayer vol. 6 (Kumo Kagyu, Kousuke Kurose), but the odds are weighted as the weapons are limited, and a former office worker decides to live a calm and peaceful life after dying of overwork-despite becoming the most powerful witch in a new world in I’ve Been Killing Slimes 300 Years vols. 1 & 2 (Kisetsu Morita, Yuusuke Shiba).

Link is in trouble and the Master Sword doesn’t seem willing to help in The Legend of Zelda: Twilight Princess vol. 7 (Akira Himekawa) and Undead Messiah vol. 1 (Gin Zarbo) is the start of a new zombie-apocalypse themed manga.