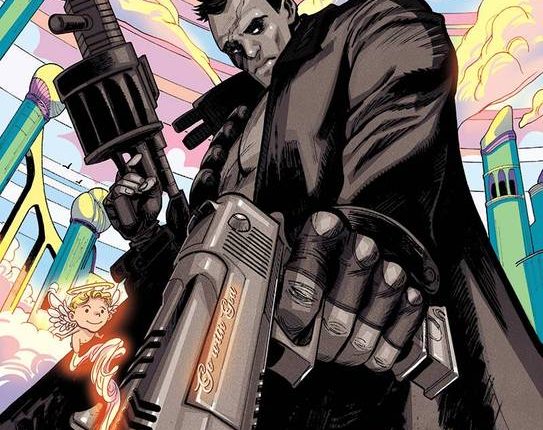 It is all about the indies this week, and there are plenty of new titles and trade to choose from, so lets jump straight in…

Rather than give the whole spiel about Heavy (Max Bemis, Eryk Donovan) lets just say that it is a story about the existential purpose of dumb boys with big guns. Because in the year of existential crises why not see how someone else deals with theirs?

Nobody dies. In the town of Stillwater, that’s not just a promise. It’s a threat. Find out why in Stillwater #1 (Chip Zdarsky, Mike Spicer,Ramon K. Perez) and dive into a world of horror and intrigue. Plus this week sees the first Umbrella Academy spin off series! When 18-year-old Séance gets himself kicked out of the Umbrella Academy, and his allowance discontinued by Hargreeves, he takes to a place where his ghoulish talents will be appreciated, which can only end badly, in You Look Like Death: Tales From The Umbrella Academy (Gerard Way, Shaun Simon, I.N.J. Culbard)

Does Vampirella have a soul that makes her worth saving? That’s the question asked in new one shot Vampirella: Trial of the Soul (Bill Willingham,Giuseppe Cafaro)

There are monsters and witches on the prowl, and it’ll take a team-up to bring them down in Belle: Hearts and Minds (Dave Franchini, Sabine Rich), and the zombies have won but not everyone is willing to accept the result in Ezequiel Himes: Zombie Hunter #1 (Victor Santos, Alberto Hernandez). Meanwhile a misadventure in Romania drops Hellboy into the middle of the paranormal mission of Fearless Dawn’s crew, and when the undead 666th Panzer Division shows up it all goes a little pear shaped in new one shot Fearless Dawn meets Hellboy (Mike Mignola, Steve Mannion).

Mindy is a young woman living with an eating disorder and trapped in a battle for her own self-worth. When she accidentally discovers a magic chocolate bar that will give her a chance to revisit her past, she thinks she has a chance to put her life back on track – but is it better to love yourself for who you are, not who you want to be? Find you in Eat, and Love Yourself (Sweeney Boo), and new original graphic novel dropping this week.

The stakes are high in the new  limited edition hardcover version of Buffy The Vampire Slayer: Hellmouth (Jordie Bellaire, Eleonora Carlin) which sees the titular heroine face off against former partner Angel in a bid to close the Hellmouth and save the world. Star Wars: Jedi Fallen Order: Dark Temple (Matthew Rosenberg, Paolo Villanelli, Ruairi Coleman) follows Jedi Master Eno Cordova and his impulsive Padawan, Cere Junda, on their most dangerous mission yet!

In a new modern new take on a classic legend, Lancelot takes on Merlin in modern day California – see the outcome in Butcher Knight (Charles Holland, Dwayne Turner), and there is a new version of the illustrated novel Cursed (Frank Miller, Tom Wheeler) in which the Lady of the Lake gifts a sword of power not to Arthur but Nimue, a young orphaned girl bent on revenge – soon to be a Netflix series.

You can reenter the world of Jareth in Labyrinth: The Coronation vol. 2 (Simon Spurrier, Ryan Ferrier, Daniel Bayliss, Irene Flores), a prequel to the Jim Henson classic, or enter the world of a young resistance fighter battling against an oppressive American Empire while searching for her own identity in a world on fire in Little Bird: Fight for Elders Hope (Darcy Van Poelgeest, Ian Bertram), a critically acclaimed and utterly beautiful tale that drops this week.

When you’ve waged war as long as Andy and her squad, you’ve gotten your hands more than bloody, but what happens when the past comes calling? Find out in The Old Guard vol. 2 (Greg Rucka, Leandro Fernandez), the series that inspired the recent Netflix adaptation. Lucy Claire: Redemption (John Upchurch) is the story of a former hero forced to take on her old role again, in the face of an old danger, and you can return to Brakebills in The Magicians: New Class (Lev Grossman, Lilah Sturges,Pius Bak).

Kurt Vonnegut’s classic novel is adapted in graphic form for the first time as Slaughterhouse Five (Kurt Vonnegut, Ryan North, Scott Newman) lands this week, and the dream of a peaceful Utopia turns into a nightmare as war breaks out on Perdita in Sonata vol. 2 (David Hine, Brian Haberlin, Geirrod Van Dyke)

There is an extended edition of crime caper Henchgirl (Kristen Gudsnuk) dropping this week, featuring an all new tale of Mary Posa as she tries to be something more than just a sidekick with rubbish colleagues and an unappreciative supervillain boss. Speaking of supervillains, M.O.D.O.K. is up to old tricks in Marvel Action: Avengers vol. 3 (Matthew K. Manning, Marcio Fiorito) and it’ll take all the combined efforts of the heroic team to stop him!

Peony has been kidnapped in an effort to stop her reaching the shows final in Space Battle Lunchtime vol. 2 (Natalie Riess) and the Starcadia universe is expanding for the first time with all new stories in Starcadia Quest: Heart of a Star (James Roberts, Aurelio Mazzara) where players fight alien monsters and each other, find new gear, explore the far reaches of space, and do their best to not become alien chow.

Pat and Jen thought their adventuring days were over, but the real adventure is yet to start in PopularMMOs: Enter The Mine (Pat + Jen, Dani Jones), a new graphic novel set in a Minecraft-inspired world.

Batmans’ back (alright) in a new hardcover edition of that classic Bats vs Jack the Ripper tale Gotham By Gaslight this week, and a being trapped in an eternal cycle of rebirth ends up on the wrong side of the war in Hawkman vol.3 (Robert Venditti, Will Conrad, Pat Oliffe, Tom Palmer) – but will he remain a hero or turn to the other side?

Also from the Big Two this week is X-Men / Fantastic Four (Chip Zdarsky, Terry Dodson) in which Franklin Richards has to decide between his true family or his mutant one – he can’t keep both happy and there will be repercussion from the decision that he makes.

Based on the acclaimed RPG, from the designers of gaming classics Final Fantasy, Granblue Fantasy vol. 5 (Cygames, Cocho) continues the story of Gran and Lyria as they fight a big bad with their new found friend.

For adult manga fans there is Welcome to Succubus High (Knuckle Curve), the tale of a young man transferred to an all girls school to teach them about boys – but there is more to these students than meets the eye!