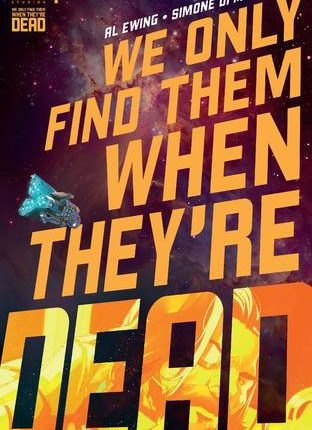 The Marvel Universe is about to be changed forever! (enter side-eye emoji here…) as Black Widow #1 (Kelly Thompson, Elena Casagrande) sees the spy with a heart take on an all new mission. Taking it back to the old school is Marvel Tales: Captain Britain (Chris Claremont, Herb Trimpe, John Byrne, Alan Davis) in which Brian Braddock must choose between the Sword of Might and the Amulet of Right.

As if 2020 wasn’t going badly enough already, the corpse of Galactus reaches planet Earth carrying a cannibalistic virus in Marvel Zombies: Resurrection #1 (Phillip Kennedy Johnson, Leonard Kirk) and it is down to Spider-Man and a ragtag group of heroes to save survivors and uncover the truth!

So J. Jonah Jameson has a podcast now – because literally who doesn’t these days – and obvisouly his first guest is Spidey in The Amazing Spider-Man Vol. 8 (Nick Spencer, Iban Coello, Ryan Ottley) and there is classic comics goodness in The Eternals: Complete Collection trade paperback (Jack Kirby)  which gives the story of a race of immortal beings possessed of seemingly limitless superhuman abilities and those that seek to oppose them.

Taror: Avengers Defenders (Alan Davis, Paul Renaud) sees Namor, Captain America and their teams drawn into a a labyrinth of madness, pain and destruction courtesy of the Infernal Ichor of Ish’lzog! Which doesn’t sound very pleasant at all.

From the Black Label series DC are dropping Hellblazer: Rise and Fall #1 (Tom Taylor, Darick Robertson) in which John Constantine might accidentally be to blame for the fact that it’s raining businessmen – hallelujah? We also have Hellblazer vol. 9 (Eddie Campbell, Paul Jenkins, Jamie Delano, Sean Phillips, Pat McEown) and vol, 23 (Jamie Delano, Jock) which between feature ghosts, spirits of vengeance and… Sid Vicious?

Also featuring some of the bat-family is DC Superhero Girls: Midterms which sees Harley take on a battle of wits with Lois Lane and Bumblebee… which I can only see going one way?!

Indie wise the big title this week has to be Doctor Who: Time Lord Victorious (Jody Houser, Roberta Ingranata), a thrilling new adventure for the Tenth Doctor that sees the shocking return of his deadliest enemies: the Daleks! But things aren’t what they seem – time is all wrong, and something is coming that terrifies even the Daleks…

Next up is Inkblot #1 (Emma Kubert, Rusty Gladd) which follows a powerful sorceress attempting to correct her greatest mistake-the creation of a magical cat that can travel through time, space, and reality. The cat threatens to unravel the fabric of the universe, doesn’t care, and just won’t listen! Because cats.

What would happen if you had an AI partner for 10 years and then one day they simply disconnected? Find out how (badly) a lonely video producer reacts to this situation in Lonely Receiver #1 (Zac Thompson, Jen Hickman). In The Orville: Launch Day #1 (David Goodman, David Cabeza), the crew intercepts Krill ship in Union space on a mysterious mission that may be more than it seems.

For the older reader – there is Belle: Ghosts and Goblins (Dave Franchini, Josh Burns) an one shot about legendary beast hunter, Anabelle “Belle” DiMarco taking on a strong of murders that the police can’t solve. Also for an adult audience in The Cimmerian: People of the Black Circle (Robert E. Howard, Sylvain Runberg, Jae Kwang Park) which is definitely, totally, 100% not an “unrestrained, violent, and sexual” Conan book if the House of Mouse asks…

Is the earth being circled by an alien satellite that monitors every action of the human race? Well according the Conspiracy: Black Knight Satellite one shot it is. Who knew.

Remember “Sexual Gary”? What was up with that guy? Find out in Sex Criminals: Sexual Gary (Matt Fraction, Chip Zdarsky, Rachael Stott). On the edge of space where humanity is harvesting the corpses of giant alien gods to survive in We Only Find Them When They’re Dead (Al Ewing, Simone Di Meo) but one man is determined to find a god before they die – and when has an idea like that ever ended badly?!

Trade wise you can follow one man’s journey from the moment the King of Monster reign of destruction begins and continues over his lifetime, one battle after another.in Godzilla: The Half Century War (James Stokoe), or take a trip down memory lane with the Prince of Eternia in He-Man and the Masters of the Multiverse, as all the iterations of the hero join forces to take down the man who would be Skeletor.

Then there is Ice-Cream Man vol. 5 (W. Maxwell Prince, Martin Morazzo, Chris O’Halloran) which features four more strange and sad stories of the critically lauded horror-adjacent anthology series, and there is a traitor to be found in Mighty Morphin Power Rangers vol. 12 (Ryan Parrott, Daniele Nicuolo).

There’s something lurking in the woods of Archers Peak, and that Something Is Killing The Children vol. 1 (James Tynion IV, Werther Dell’Edera) in this creepy fantastic horror comic, and Powers: The Best Ever hardcover (Brian Michael Bendis, Michael Avon Oeming) sees the original creative team reunite to celebrate the 20th anniversary of the Eisner Award-winning cops-and-capes comic.

In The True Lives of the Fabulous Killjoy: California library edition (Gerard Way, Shaun Simon, Becky Cloonan) Girl has to take on Better Living Industries without her former compatriots.

Minecraft: Wither Without You (Kristen Gudsnuk) is the tale of two monster hunters set on rescuing their mentor, Senan the Thorough. Also for all ages in My Little Pony: Omnibus vol. 1 (Katie Cook, Heather Nuhfer, Andy Price, Amy Mebberson), featuring stories of of Twilight Sparkle, Rainbow Dash, Rarity, Fluttershy, Pinkie Pie, Applejack, and all of their friends.

The bad kids try to uncover the mystery of Eleven’s psychic powers in, Strangers Things: The Bully (Greg Pak, Valeria Favoccia) a scary all-ages graphic novel, and Gran and Lyria are still on the run in Granblue vol. 4 (Cygames, Cocho)

On the non-fiction front, A Quick and Easy Guide to Sex and Disability (A. Andrews) is pretty self-explanatory actually.

*Hashtag spoilers for a 21 year old movie. Also, that means The Sixth Sense is old enough to legally drink in the United States now and that makes me feel old.