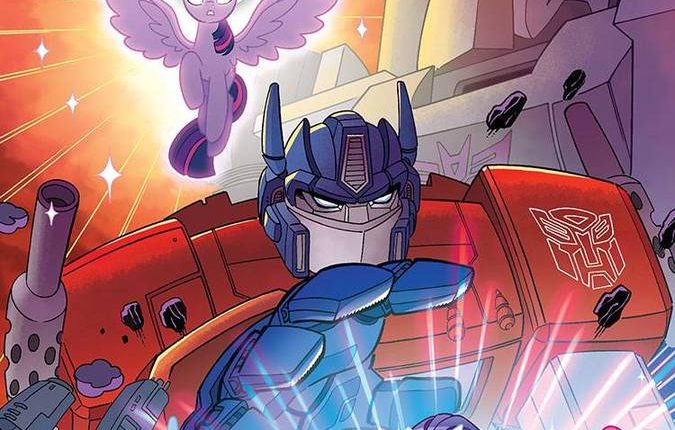 The year is 2020. Normal life has ground to a halt due to a global pandemic. Nothing is too bizarre for this brave new world world any more… or so you thought! My Little Pony / Transformers: Friendship In Disguise #1 (James Asmus, Ian Flynn, Jack Lawrence, Tony Fleecs) hits the racks this week, and when a spell goes wrong for Queen Chrysalis, Equestria is suddenly filled with Autobots and Decepticons!

For the tabletop gamers – and with a stellar creator lineup –  there is Vampire: The Masquerade: Winters Teeth #1 (Tim Seeley, Tini Howard, Blake Howard, Dev Pramanik, Nathan Gooden) which sees a Camarilla courier taking a a mysterious younger vampire under her wing with potentially disastrous consequences.

Console gamers get their share of the new titles this week too, as Aloy and Talanah return in a new story set after the events of the game in Horizon: Zero Dawn #1 (Anne Toole, Ann Maulina). Finally for the singles, have you ever wondered why there are no proven sightings of extraterrestrial life on Earth? Find out the truth in Conspiracy: Men In Black (Hans Rodionoff, Adam F. Goldberg, Allan Otero)

From ongoing series there is East of West vol. 10 (Jonathan Hickman, Nick Dragotta) which is the conclusion of the sci-fi Western epic, more of the threads of the world get drawn together in Five Years vol. 2 (Terry Moore) and Sunnydale is under threat as the Hellmouth opens in Buffy The Vampire Slayer vol. 3 (Jodie Bellaire, David Lopez).

The first chapter of the highly acclaimed, Eisner Award-winning superhero saga Black Hammer (Jeff Lemire, David Rubin, Dustin Nguyen, Michael Allred, Emi Lenox, Nate Powell, Matt Kindt, Ray Fawkes, Dean Ormston) drop this week in a deluxe, oversized hardcover format, a TV-tie in, in the form of Snowpiercer vol. 3 (Olivier Bocquet, Jose-Luis Bocquet) and there is another game tie-in with The World of Cyberpunk 2077 (Marcin Batylda) which delves into the history of the neon-tinted districts of Night City, and Oliver (Gary Whitta, Darick Robertson), is a dystopian future take on the Dickens classic

It is puzzles within puzzles as City of Secrets (Victoria Ying) hits the shelves for younger readers this week, alongside The Tea Dragon Society (Katie O’Neill), and Wonder Pony (Marie Spenale) in which a girl gets gifted special powers by a small pin toy pony called Jean-Pierre.

Its 80s time with The Dark Crystal: Age of Resistance: The Quest for the Dual Glaive (Nicole Andelfinger, Matias Basla) and Down at Fraggle Rock (Various). Keeping the nostalgia train going there is also Mighty Morphin Power Rangers: Beyond The Grid (Marguerite Bennett, various) and My Little Pony: Feats of Friendship (Ian Flynn, Tony Fleecs)

Finally for the indie titles is Udon Noodle Soup: Little Tales for Little Things (Yani Hu), a collection of short stories about young love in all its forms.

DC are dropping a few new trades this week as well as two new titles: Dark Knights: Death Metal: Legends of the Dark Knights #1 and a new book in the Sandman Universe, The Dreaming: Waking Hours #1 (G. Willow Wilson, Nick Robles) which sees Ruin, creator of nightmares delivered into the real world.

For Manga fans there are a few new titles, with the first two volumes of Worlds End Harem: Fantasia (Link, Savan) hitting the shelves, along with To Love Ru: Darkness vol. 16 (Saki Hasemi, Kentaro Yabuki) and hot off the presses is Goblin Slayer vol. 1 (Kumo Kagyu, Noboru Kannatuki) in which a young priestess has formed her first adventuring party, but almost immediately they find themselves in distress. It’s the Goblin Slayer who comes to their rescue–a man who’s dedicated his life to the extermination of all goblins, by any means necessary. And when rumors of his feats begin to circulate, there’s no telling who might come calling next!

Marvel are bringing up the rear with a huuuuge new set of releases, including some new editions to the Empyre summer event: The Empyre Handbook (various) so that you can keep an eye on who is who in the event, and Lords of Emypre: Celestial Messiah #1 (Alex Paknadel, Alex Lins) in which the eve of Quoi’s ascension is at hand! But when the trials are interrupted by an unexpected interloper – his mum aka Mantis – who will win this battle of wills? Guess you’d better read it to find out!

There is a new complete collection of Young Avengers (Kieron Gillen, Jamie McKelvie, Matthew Wilson) in which the seminal creative team reinvent the super-hero comic book in their own freakish image. Punisher: Soviet (Garth Ennis, Jacen Burrows) sees the Russian mob come to New York City to take on Frank Castle on his own turf, and in Morbius vol. 1 (Vita Ayala, Marcelo Ferreira) the living vampire might just have found a cure!

Marvel Zombies vol. 1 (various) presents an alternative Universe where the greatest heroes we know are actually flesh eating monsters, who have just run out of snacks… Infinity Gauntlet (Jim Starlin, Ron Lim, George Perez) gets the Marvel Select Hardcover treatment and last but by no means least there is Marvel Action: Spider-Man vol. 4 (Delilah Dawson, Davide Tinto) which sees a new Spidey hit the streets – but there’s not much of a welcome for this big bad!

That’s it folks, drop us a comment on what you’re picking up this week, and what we should be checking out!