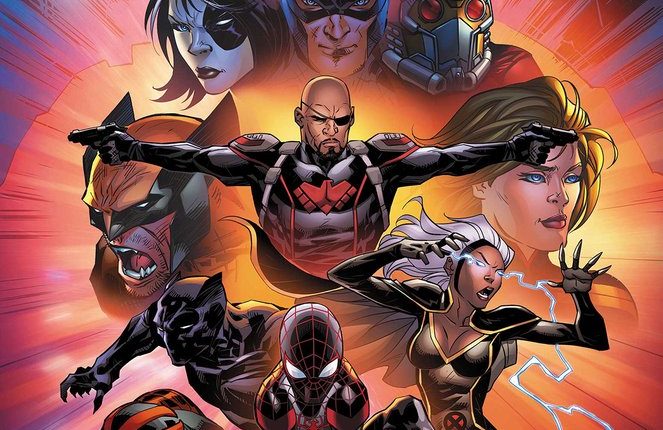 Sarah here again with the rundown on this weeks new releases, hitting the racks in your local comic book shop tomorrow…

Lets kick things off with DC this week, who have just one new title hitting the racks in the form of Dceased: Unkillable (Tom Taylor, Karl Mostert, Trevor Scott) which judging by his work on Suicide Squad Taylor will take as a challenge! What happened to the villains when all the heroes died? This three issue mini-series aims to answer that, with Red Hood and Deathstroke leading the way

Trade wise there is Batman Detective Comics vol. 1 (Peter J. Tomasi, Mark Irwin, Christian Alamy, Keith Champagne, Doug Mahnke, Jaime Mendoza) in which the Dark Knight actually has some deetcing to do, at the request of Commisioner Gordon, plus ﻿Doom Patrol by John Byrne Omnibus﻿ (John Byrne, Chris Claremont, Doug Hazlewood, Jerry Ordway, others) gives us a dose of the Worlds Strangest Heroes, and from the Sandman Universe there is ﻿House of Whispers﻿ vol. 2 (Nalo Hopkinson, Dan Watters,) Dominike “Domo” Stanton, Nelson Blake, Isaac Goodhart, Amancay Nahuelpan, Aneke) in which the pandemic is spreading, and Erzulie calls upon the spider-god of stories, Ananse, to assist her in unraveling the truth!

Plus from the DC Black Label Hill House Imprint (try saying that fast!) there is Plunge #1 (Joe Hill, Stuart Immonen), which sees a distress call issued from a ship that disappeared 40 years previously, and send the Carpenter Salvage off an a mission to find out what happened…

Over at the House of Ideas there’s only three new titles, but a wealth of trades! The autumn event continues with 2020 Machine Man #1 (Christos N. Gage, Tom DeFalco, Andy MacDonald, Mike Hawthorne) trying to decide which side of the revolution he belongs on, Marvel Voices (Vita Ayala, Brian Stelfreeze, more) moves from podcast to page to highlight diverse creators, and Wolverine #1 (Ben Percy, Adam Kubert, Viktor Bogdanovic) sees the best come back, finally in a place of peace and security and surrounded by family… which can only go one way!

Trade wise there is Taskmaster: Anything You Can Do (David Michelinie, more) in which the copycat criminal shows off everyone else’s skills, Gwenpool Strikes Back (Leah Williams, David Baldeon) breaks the fourth wall – and some faces – at every opportunity, and Deathshead: Freelance Peacekeeping Agent (Simon Furman, Geoff Senior, more) is a collection of the original tales of the robot bounty hunter with an identity problem.

Everything is on fire in ﻿Ghost Rider vol, 2 (Simon Spurrier, Jason Aaron, Javier Saltares, more) as two Riders battle to find out what is going on in their world, ﻿Uncanny X-Men Complete Collection ﻿vol. 2 (Kieron Gillen, Brandon Peterson, more) collects Gillen’s acclaimed run on the mutant based series, and ﻿Tales Through The Marvel Universe﻿ (Greg Pak,  Tomm Coker, more) does exactly what the title suggests, with stories from the 1940s to the present day featuring some all time fan favourite characters.

On to the indie publishers now and boy are there a whole bunch of new books coming out this week! The biggest chin is Hollywood is back in Death to the Army of Darkness (Ryan Parrott, Jacob Edgar), a new mini-series that follows on from the events of the AoD movie, while Red Sonja: Age of Chaos (Erik Burnham, Jonathan Lau) sees Sonja’s plan to stop an enemy backfire, with potentially devastating consequences.

There are rock’n’roll adventures galore in Archie Meets The B52’s #1 (Alex Segura, Matt Rosenberg, Dan Parent) in a one-shot crossover, and Barbara The Barbarian (Jos, Sonia Moruno, Manuel Diaz) sees street fighting and sinister plans afoot, and in the Valiant universe the truth is revealed in Bloodshot #0 (Tim Seeley, Marc Laming), and Doctor Tomorrow #1 (Alejandro Arbona (A) Jim Towe, Kenneth Rocafort) meets.. himself? Canopus (Dave Chisholm) is Castaway meet Annihilation, as a woman awakes on an alien planet with no memory of how she got there

The Bettie Page: The Princess & The Pinup trade collection (David Avallone, Julius Ohta, Jordan Michael Johnson) sends our titular heroine on the search for a missing monarch, while Kiss: The End (Amy Chu, Edu Menna) send the band on a mission to save a young man from his post-death fate. This weeks “longest title” award goes to Pierce Brown’s Red Rising: Son Of Ares  vol. 2 (Pierce Brown, Rik Hoskin, Eric Powell), and the Chosen One is back in Buffy The Vampire Slayer vol. 2 (Jordie Bellaire, David Lopez) and sticking with TV adaptations there is also Steven Universe vol. 6 (Grace Kraft, Rii Abrego) featuring all new stories about the characters from the hit show.

Godkillers #1 (Mark Sable, Maan House) merges folklore and warfare, as a team of disparate new colleagues take on insurgents using mythical creatures as weapons, and Savage Bastards #1 (David Galiano, Carlos Angeli) is a tale of brotherhood, betrayal and revenge. Meanwhile there is a twisted series of intertwining tales in Bang! #1 (Matt Kindt, Wilfredo Torres) that all connect back to one man. The past is back to haunt the crew in Hellboy & The BPRD: Return of Effie Kolb #1 (Mike Mignola, Zach Howard)/

After some horror? Check out ﻿Manor Black (Cullen Bunn, Brian Hurtt, Tyler Crook), the tale of a family of powerful sourcerers vying for power.  In Assassins Creed: Bloodstone hardcover (Guillaume Dorison, Ennio Bufi) sees the Assassin / Templar war hit Vietnam, and in a totally different vein is Cat and Cat vol. 1 (Christophe Cazenove, Herve Richez, Yrgane Ramon), a slice of life tale about a cat and her new family, in the same region as Chloe and Cartoon (Greg Tessier, Amandine) which also features a young girl and her cat!

If you are after monsters having (mis) adventures look no further than The Adventures of Byron (Chris Hamer), featuring tales of 3 monster best friends, while in Crucified (Sheldon Allen, Armin Ozdic) an assassin gets given the ultimate target – Jesus Christ! In The Dysasters (P.C. Cast, Kristin Cast, Antonio Bifulco) a pair of unlikely allies meet up with just their strange powers in common, and Powers In Action (Art Baltazar) is the latest kid-friendly book from the ever popular Art Baltazar.

Check out Going To The Chapel (David Pepose, Gavin Guidry) for a wedding crashed by bank robbers, while Shows End (Anthony Cleveland, Jeferson Sadzinski) is the tale of an outcast joining a travelling freak show. Battlepug vol. 1 (Mike Norton) follows a war-mongering not-so-tiny dog, and Beserker Unbound vol. 1 (Jeff Lemire, Mike Deodato) is classic swords and sourcery from two of the top names in comics.

True war is the name of the game in Fax From Sarajevo (Joe Kubert), the story of as family stuck in a city under siege with only a fax machine to communicate with the outside world. Don’t know what a fax is? Ask your parents…

This is a big week for Manga titles, as Ancient Magus Bride vol. 2 (Kore Yamazaki) sees Hatori Chise take on the joint roles of apprentice and wife to escape her life, while in Combatants Will Be Dispatched vol. 2 (Natsume Akatsuki (A/CA) Masaaki Kiasa) the mercenaries find themselves at war with the Devil’s army.

Speaking of the Devil, Devil Is A Part Timer vol. 15 (Satoshi Wagahara, Akio Hiiragi) sees Emi missing and an emergency at Chio’s school. Don’t Toy With Me Miss Nagatoro vol. 2 (Nanashi) sees the freshman continue to torture the older students, and in Drifting Dragons vol. 3 (Taku Kuwabara) the crew continue their adventures, a finally in Fairy Tale: 100 Years Quest vol. 3 (Hiro Mashima, Atsuo Ueda) the whole Guild are back in action in this sequel to the hit series. Phew, that just about covers it for this week!

As always our thanks go out to CGC Comics for sponsoring this post.