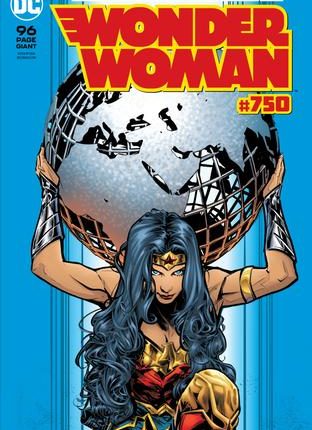 Happy birthday Diana! Well, sort of… Wonder Woman #750 (everyone ever, basically) is a 96 page spectacular, celebrating the Princess of the Amazons, which includes the finale of the DC Year of the Villain event. The giant comic also sees guest appearances from characters in Diana’s past, as well as stories from the likes of Gail Simone and Greg Rucka.

Also out from DC this week is the latest in their movie tie-ins, with Birds of Prey: Harley Quinn (Amanda Conner, Jimmy Palmiotti, Chad Hardin, Stephane Roux) also hitting shelves to give new and old fans alike a taste of Dr Quinzell before the BoP movie drops, as does Birds of Prey: Giant #1 (various) which combines classic stories with a new Gail Simone / Inaki Miranda story.

Marvel are making a splash this week as they launch Atlantis Attacks #1 (Greg Pak, Ario Anindito) which pits Namor and his buddies against the Agents of Atlas, plus speaking of team ups, the Guardians of the Galaxy #1 (Al Ewing, Juan Cabal) are back again, and this time getting dragged out of retirement to face the Gods of Olympus!

Carrying on their latest event is Ruins of Ravenscroft: Dracula (Frank Tieri, Stefano Landini, Angel Unzueta) which teaches Captain America that not all criminally insane offenders can be rehabilitated. Speaking of events, Web of Venom: Good Son #1 (Zac Thompson, Diogenes Neves) spins out of the events of Absolute Carnage, and looks at what Dylan Brock and Normie Osborn (aka Son of Venom and the Goblin Childe) get up to next.

If you look closely this week you will be able to see Susan Storm teaming up with former foe Black Widow, with the trade release of Invisible Woman (Mark Waid, Mattia De Iulis). Natasha Romanoff also crops up in this weeks Marvels Black Widow: Prelude (Peter David, Carlos Villa) which gives a potted history of the red room assassins in anticipation of the release of her new solo movie.

Finally from the house of ideas this week is Valkyrie: Jane Foster vol. 1 (Jason Aaron, Al Ewing, CAFU) in which Dr Foster – now back in her human body after beig the Goddess of Thunder for a few years – has to face the consequences of all the time she spent off earth, and pay the price for her part in the War of the Realms by taking on the mantle of Valkyrie, guide to the dead.

Getting the old team back together is Ghostbusters: Year One #1 (Erik Burnham, Dan Schoening), to tell their tales of ‘busting before they started treating it as a business. A different kind of team up is happening in Kidz (Aurelien Ducoudray, Jocelyn Joret) in which a few young survivors of a zombie apocalypse get by as only 10 year olds can – eating ice cream and reading comics – until this sort-of-tranquil lifestyle is interrupted by the worst possible interlopers… girls!

Facing up to both the forces of chaos and the consequences of her actions this week is everyones favourite She Devil, as Red Sonja: Age of Chaos #1 (Erik Burnham, Jonathan Lau) is released. Also coming out this week is a brace of trades for fans of Netflix hit show Stranger Things, with both Stranger Things: Zombie Boys (Greg Pak, Valeria Favoccia) in which a newcomer to Hawkins wants to make a zombie horror flick, and Stranger Things: Other Side (Jody Houser, Stefano Martino, Keith Champagne) which shows us Will Byers versio of events form series one of the show.

The trade collection Forever Maps (Michael Lagace, Todor Hristov) follows a man who is given a map in 1794, only to follow in to find another, and another… for a century. It isn’t until he stops following the maps that time catches up with him – but is immortality worth the price? Sticking with the theme of time, Dr Who: Time Out Of Mind (Jody Houser, Roberta Ingranata, Enrica Eren Angiolini) collects together the comics Christmas special featuring the current Doctor, and looks at who – or what – Santa actually is, and whether chimneys are also bigger on the inside.

Sera and the Royal Stars vol. 1 (Jon Tsuei, Audrey Mok) is a beautiful, Persina inspired story of a princess who needs to save her kingdom from war and famine, whilst escaping the ghosts of her past. Escaping a gulag is the only first problem for the lead character of Road of Bones (Rich Douek, Alex Cormack), as he then has to contend with the fellow escapees, the desolation of the tundra, and the worst beings that Russian folklore has to offer.

If you are after something slightly more surreal, why not take love advice from a lazy egg in Gudetama: Love for the Lazy (Wook Jin Clark), a hardcover guide to everything from dating to dumping courtesy of a cute Japanese character that also happens to be an actual egg!

Also hitting shelves this week is the ever popular on-goin series Gunnerkrigg Court vol. 6 (Tom Siddell) which continues the story of Antimony Carver and friends, and sticking with the school theme is My Hero Academia vol. 6 (Hideyuki Furuhashi, Betten Court).

If you like the kind of princess that wants to save herself, and isn’t in to waiting around in a a tower to be saved, check out The Runaway Princess (Johan Troianowski), which sees Robin heading out to seek her own fun and fortune.

Meanwhile for older readers there is Tokyo Ghoul vol. 14 (Sui Ishida) in which Kaneki undergoes a metamorphosis that may finally bring the warring factions of the ancient war together!

Well, that’s a wrap for this time out, as ever thank you to CGC Comics for sponsoring this post.