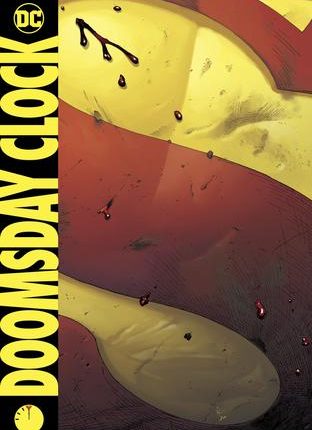 Welcome to this week’s roundup of the latest titles hitting the shelves, and the new trades coming out this week.

Without a shadow of a doubt the single biggest release this week won’t be a new title, but the culmination of two years work, as Doomsday Clock #12 (Geoff Johns, Gary Frank) finally hits the racks! In a rather sensible piece of marketing, they are also releasing Watchmen Companion HC (Ray Winninger, Daniel Greenberg, Dennis O’Neil, Denys Cowan, Rick Magyar, Dave Gibbons) which features a wealth of out-of-print and rarely seen material, including features on the Minute Men, the first-ever advert seen for the book, and much more.

Anyone would think that people would be gift buying this week by the number of hardcovers and trades DC are dropping, including Green Lantern: Intergalactic Lawman (Grant Morrison, Liam Sharp) and Green Lantern: The Day The Stars Fell (Grant Morrison, Giuseppe Camuncoli, Trevor Scott, Liam Sharp)the first two volumes of the current run that has been gaining accolades all over the place. If you prefer your heroes a little less colourful there is also Batman: Vol 11: The Fall and the Fallen (Largely Tom King but also everyone else ever), which sees where Bruce decides to head after the events of “Knightmares”, or you could dip your toes into the water and check out Aquaman; Unspoken Water (Kelly Sue DeConnick, Robson Rocha, Daniel Henriques) and Aquaman: Amnesty (Kelly Sue DeConnick, Robson Rocha, Viktor Bogdanovic, Daniel Henriques, Eduardo Pansica, Julio Ferreira, Jonathan Glapion, Ryan Winn), the latest two volumes of the Sea King’s story.

If you have some pre-Christmas pennies burning a hole in your pocket check out the reprinted edition of the early Clark Kent stories in Superman: The Golden Age: Omnibus HC (Jerry Siegel, Joe Shuster, Others), a huge hardcover that sees the Man of Steel fighting for truth, justice and the American way! Speaking of omnibii (omnibuses?!) there is also Animal Man by Jeff Lemire Omnibus HC (Jeff Lemire, Scott Snyder, Steve Pugh, John Paul Leon, Alberto Ponticelli, Timothy Green, Rafael Albuquerque, Cully Hamner, Marco Rudy, Travel Foreman) which has a surprisingly large roster of creators given its title…!

DC are also showing love to the new titles this week with Suicide Squad #1 (Tom Taylor, Bruno Redondo, Ivan Reis, Joe Prado) reuniting Harley Quinn and Deadshot with a whole new team of reprobates, and Year of the Villain: The Infected: The Commissioner (Paul Jenkins, Jack Herbert) carrying on the current event *and* vying for longest title of the week.

Turning to the imprints, there are two more new titles coming, in the form of The Low, Low Woods (Carmen Maria Machado, Dani, J.A.W. Cooper) the latest spine-tingler from the DC Hill House label; and Wonder Woman: Dead Earth (Daniel Warren Johnson) a post-apocalyptic look at Princess Diana from the creator of Murder Falcon.

Not to be outdone, let’s take a peek at what the House of Ideas has in store for us this week, both in and out of events! The biggest release – figuratively and literally – has to be the House of X / Powers of X (Jonathan Hickman, R. B. Silva, Pepe Larraz) hardcover, which contains all 12 issues from the double-feature that rewrote Marvel history this summer.

Annihilation Scourge: Beta Ray Bill (Michael Moreci, Alberto Alburquerque) and Annihilation Scourge: Silver Surfer (Dan Abnett, Paul Davidson) both see the killer wave sweeping across the galaxy, and the two titular heroes must do all they can to save the day, or risk being swept up themselves! Plus Marvel Tales: Annihilation (Steve Gerber, Don Heck) gives us tales featuring Daredevil, Captain America and Moondragon.

Finally for the big two this week there is Star Wars: Empire Ascendant # 1 (Charles Soule, Caspar Wijngaar), which features tales of all your favourite characters from the franchise, and Marvel Strike Force: Art of the Game HC, which takes an in-depth look at the characters and design of the hit mobile game.

The clock is ticking so let’s see what the indie publishers are dropping this week – Image are first out of the gate with Project X-Mas (Mark Millar, TOP SECRET!), which is apparently a sequel to a beloved Millarworld tale that – in association with Netflix – is getting a new lease of life this week. Could be anything, place your bets now folks! Also out is Hardcore: Reloaded (Brandon Thomas, Francis Portela) which claims to be coming back with more bullets than John Wick – quite the grand threat! Also returning this week is Old Guard: Multiplied (Greg Rucka,  Leandro Fernandez) the latest story about the apparently immortal soldiers – soon to be a major motion picture (do they still say that?! starring Charlize Theron!

Trade wise Image are triple-dipping this week, with Ice Cream Man vol 4 (W. Maxwell Prince, Martin Morazzo) continuing it’s run of creepy horror shorts, Sonata vol 1 (David Hine, Brian Haberlin) giving us a tale of two races both seeking the same promised land, and finally, Outer Darkness vol 2 (John Layman, Afu Chan) which takes us back to the decks of the Charon, and it’s exploration of all the horrors that space has to offer.

Two new titles this week from Dark Horse, but adding to existing series; Tales From Harrow County: Deaths Choir (Cullen Bunn, Naomi Franquiz) returns us to the scene of the award-winning horror series, while Skulldigger & Skeleton Boy (Jeff Lemire, Tonci Zonjic) take us back to Spiral City and the world of Black Hammer. Finally, they have Drifters vol 6 (Kohta Hirano) in which the warriors of the human race take on the Black King’s hordes. 7

Boom! are bringing us the festive with Klaus: Life and Times of Joe Christmas (Grant Morrison, Dan Mora) featuring a series of short stories and new material. The Art and other Mistakes of Eric Powell (Eric Powell) does exactly what it says on the tin, while Jim Henson: Storyteller: Sirens (Various) collects four mermaid-inspired tales. Bone Parish vol 4 (Cullen Bunn, Jonas Scharf) is yet more horror from Mr. Bunn and friends, while Hex Vet: Flying Surgery (Sam Davis) is a much more lighthearted book for the younger reader in your life, as Nan and Clarion continue their witch-vet training.

That’s it for this week folks, let us know in the comments or on social media what you’re picking up, and what you think we should be checking out!