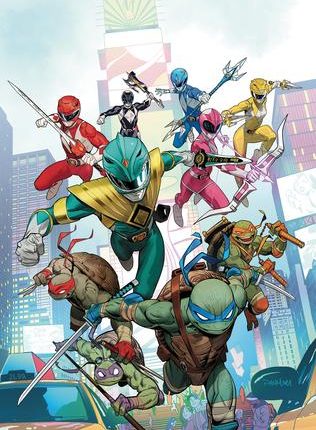 Sarah here with this weeks new titles and trade releases…

Just when you thought it was safe to go back into the House of Ideas following the end of the Absolute Carnage, Marvel are at it again with another event! This time around we have got Annihilation Scourge: Fantastic Four #1 (Christos N. Gage, Diego Olortegui) and Annihilation Scourge: Nova #1 (Matthew Rosenberg, Ibraim Roberson) each of which sees the titular heroes tackling a universe-imperiling threat in the Negative Zone!

Plus if one event isn’t enough why not check out Venom: 2099 (Jody Houser, Francesco Mobili, Geraldo Borges) which sets the symbiote eighty years in the future and in the hands of an evil multinational corporation…

A group of near-legendary heroes assemble this week for Thor: the Worthy (Walter Simonson, Kathyrn Immonen, Ron Frenz, More), and that is just the creative team! Featuring fan favourites including Beta Ray Bill and Sif, this is a must for fans of the God of Thunder. Plus you can celebrate a galaxy far, far away with Star Wars Saga #1 (various).

It’s ladies night over at DC, as they release a collection of new stories and reprints in the form of Batwoman / Supergirl: Worlds Finest: Giant #1, which also featutes appearances from a whole host of DC heroes and villains. Plus Donna Troy is front and center in the latest issue of the on-going spin-off from The Batman Who Laughs, as we see Year of the Villain: Infected: Deathbringer (Zoe Quinn, Brent Peeples) take a hero who is done with human nonsense and turn her into something much darker…

It must be December, because the DC holiday special is dropping this week, but this isn’t you usual Superman-as-Santa festive fun! New Years Evil (everyone, no seriously the creator list on this is crazy) sees the villains take center stage, and the Joker wants to put you all on the naughty list!

This week sees the release of the crossover that you didn’t know you need until now: Power Rangers / Teenage Mutant Ninja Turtles #1 (Ryan/ Parrott, Simone Di Meo) – but will the disparate heroes team up or end up fighting?!

Imagine you could move your consciousness – your soul – into another body? That is what can happen in Angela Della Morte #1 (Salvador Sanz); but what happens in the space between, what if there was something else out there that could also travel the void between bodies… Kill Whitey Donovan #1 (Duncan Sydney, Natalie Barahona) is  a tale of a woman on a mission, and needing helpful from sources unusual to her,

Set in the Nazi-occupied Paris of 1944, Butcher of Paris (Stephanie Phillips, Dean Kotz) is a retelling of a real life series of murders that shook an already battered city as more than 200 victims fell foul of the killer. For a much lighter read why not check out the Mickey and Donald Christmas Parade 2019 which collects eight shorts filled with fun, friendship and family.

One half of the famous Luna Brothers returns to the shelves this week alongside a debut contributor, with the release of 20XX #1 (Lauren Keely, Jonathan Luna), which sees the world divided into those with telekinetic powers and those without, but even having a power doesn’t stop the division as the book delves into the politics of division and difference. 007 is a man on an art-forgery mission as the slick spy returns in a new series this week: James Bond #1 (Vita Ayala, Danny Lore, Eric Gapstur).

If you are after a longer read then this week sees the release of She Could Fly: The Lost Pilot vol 2 (Christopher Cantwell, Martin Morazzo) which sees Luna continuing her mission to track down the flying woman and reclaim her rapidly spiraling sanity.  Birthright vol. 8 (Joshua Williamson, Andrei Bressan, Adriano Lucas) continues the ongoing tale of a Park Ranger on a mission to find the secret history of magic and save the Earth. Following her brutal murder a woman is reborn as part-plant, part-human but all demigoddess in Black Orchid (Neil Gaiman, Dave McKean), which is being re-released in a new trade paperback this week.

There’s a double-whammy of Riverdale this week, as Vampironica vol. 1 (Megan Smallwood, Greg Smallwood) gives us the backstory as to how Riverdales girl you love to hate became a blood-sucking force of evil (no change there then!) and Vampironica: New Blood (Frank Tieri, Michael Moreci, Audrey Mok) kicks off a new tale of Ms.Lodge, who following the Jughead the Hunger vs. Vampironica crossover is back on earth and looking for answers. Also, still a vampire.

Fantasy fans can look forward to the release of Pathfinder vol. 4 (Erik Mona, James L. Sutter, Tom Garcia, Kevin Stokes, Leandro Oliviera) in which a group of would-be heroes recount their early exploits in order to gain entry to the Pathfinder Society. If you prefer something a little closer to home, check out Sherlock: A Scandal In Belgravia (Steven Moffat, Jay) which continues the adaptation of the popular TV series and in this new volume introduces the one and only Irene Adler.

The Drifting Classroom (Kauzo Umezz) sees an entire school disappear, leaving just a hole in the ground. But it has to have gone somewhere, and the pupils and teachers might fight not only to get home, but for their very survival! In The Nikopol Trilogy vol 1 (Enki Bilal) a man destined to drift through space in cryo-preservation for 30 years returns to an Earth ravaged by nuclear war and the return of ancient Egyptian gods. Which sounds quite reasonable to me…

For manga fans this week sees Scarlet Soul vol. 1 (Kira Yukishiro) hit shelves, the tale of two sisters tasked with the family duty of maintaining the barrier between the human world and that of demons. There is also Udon Noodle Soup: Little Tales for Little Things (Yani Hu) a selection of short stories about young love. We also have the limited edition Warrior Nun Areala: Armor of God (Craig Babiar) digest coming out this week.

Do you or your DM struggle to tell your Spirit Fox from your Smoke Devil? Can’t tell if you are facing an Owlbear or a Orc? Then you need Dungeons & Drawings: Illustrated Compendium of Creatures (Blanca Martinez de Rituerto, Joe Sparrow), a deluxe edition featuring three volumes worth of illustrated creature descriptions and statistics.