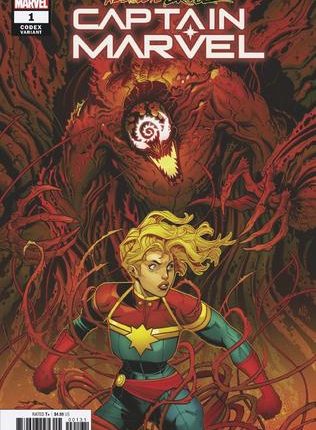 It’s a massive Marvel takeover this week, with a pile of new releases bigger than one of Santa’s elves! Lets dive in with  2099 Alpha #1 (Nick Spencer, Viktor Bogdanovic) is the culmination of threads being sewn throughout The Amazing Spider-Man, and looks at whether the Marvel universe – now 80 years old – can survive in another 80 years time? In the same vein there is Fantastic Four 2099 (Karla Pacheco, Steven Cummings) which look at the legacy of a family of superheroes in a world ruled by Doom!

The big guy is back in Immortal Hulk (Al Ewing, Joe Bennett) vol. 5, portentously subtitled Breaker of Worlds, then we have the newest iteration of everyone’s favourite mercenary, Deadpool (Kelly Thompson, Chris Bachalo) starting a new era for Wade as he takes on the King of the Monsters, with an amazing team behind the book.

Continuing their current event is Absolute Carnage: Captain Marvel #1 (Emily Lerner, Andrea Broccardo) in which everyone’s favourite Flerkin has had the Carnage treatment – can Carol save Chewie before it’s too late?There is another new event heading to the racks too, the opening salvo of which is Annihilation Scourge: Alpha (Matthew Rosenberg, Juanan Ramirez), which sees a new threat gathering in the Negative Zone, which Nova will need to form a crack team to combat.

Given that we are headed towards the festive season there is a beautiful hardcover slipcase book out this week for the Avengers fan in your life, Avengers Endgame: Art of the Movie (Eleni Roussos), showcasing the work behind the culmination of 22 films and 10 years in one huge cinematic event. There is also Art of Star Wars: Jedi: Fallen Order which is a full-color, oversized hardcover volume that captures the design process of Star Wars Jedi: Fallen Order, a galaxy-spanning, action-adventure video game from Respawn Entertainment and Electronic Arts arriving later this year.

There are also a couple of Star Wars long-form fictions books this week, with Journey to Star Wars: Rise of Skywalker: Force Collector (Kevin Shinick, Tony Foti) a young adult novel set just before The Force Awakens, a restless teenager sets out to discover what connection his mysterious Force powers have to the fabled Jedi and what the Force has in store for him. Then there is Journey to Star Wars: Rise of Skywalker: Star Wars Allegiance (Ethan Sacks, Luke Ross) which sees General Leia Organa and Rey taking on the First Order and Kylo Ren, alongside all the new favourties from the Star Wars universe.

Plus there is Star Wars: Age of Resistance: Villains﻿ (Tom Taylor, Leonard Kirk) trade collection, featuring all your favourites from the Dark Side, and as a counter-point ﻿Star Wars: Rebels and Rogues﻿ (Greg Pak, Phil Noto) the twelth volume in the on-going comic series.

DC are expanding their newest Bat-iverse with Batman White Knight present Von Freeze (Sean Murphy, Klaus Janson), a standalone tale that opens on the night of Bruce Wayne’s birth and spans generations, with ramifications for the Wayne family that won’t be easily forgotten. There is also a huge release (literally) in the form of the DCeased hardcover (Tom Taylor, Trevor Hairsine, Stefano Guadiano, James Harren, Laura Braga, Darick Robertson, Richard Friend, Neil Edwards), which asks the question of what happens to the Worlds Finest when the world ends? Speaking of dead superheros, this week also sees Death of Superman: The Wake (Louise Simonson, Cat Staggs, Joel Ojeda, Jos? Marzan, Laura Braga, Jesus Merino, Andy Owens, Jon Bogdanove) for the first time in print for this previously-digital only 12 issue series.

Meanwhile the Year of the Villain continues with Infected: Scarab #1 Dennis Hopeless, Freddie Williams II), with reluctant superhero Blue Beetle being the latest target of the Batman Who Laughs…

DCs Black Label imprint is back, this time out with Question: The Deaths of Vic Sage (Jeff Lemire, Bill Sienkiewicz, Denys Cowan) with an outstanding creative giving us a story that takes us past the black and white of right and wrong and into those gray areas between the two… Fans of 90s nostalgia can take a trip down memory lane with Lobo (Keith Giffen, Alan Grant, Denys Cowan, Keith Giffen, Christian Alamy, Kevin O’Neill, Simon Bisley) which is certainly not a book for the younger readers out there, as it sets out to offend pretty much everyone in fast shooting, gut-wrenching style.

Fans of The Umbrella Academy would do well to pick up Hazel and ChaCha Save Christmas (Gerard Way, Scott Allie, Tommy Lee Edwards), which sees the madcap assassins on a mission to track down a rogue time agent and cross paths with a plot to discredit Christmas! There is another Netflix/comics crossover in the form of GLOW vs The Babyface (Aimee Garcia, AJ Mendez, Hannah Templer), which sees the female wrestlers taking on a local news anchor to prove that wrestling isn’t a bad influence on children – whilst also discovering a runaway has been living under the ring! Sticking with the Netflix there there is also The Witcher Omnibus (Aleksandra Motyka, Marianna Strychowska) vol. 2 collecting a series of one shots and mini-series, as well as a sketchbook selection.

Eternia has had a bit of a glow-up in He-Man and the Masters of the Multiverse #1 (Tim Seeley, Dan Fraga, Richard Friend), a new mini-series that takes the titular heros on a journey to find all the different versions of himself in a bid to save the universe with the help of… Skeletor?! Superpowers and teenage romance collide in Heart Attack (Shawn Kittelsen, Michael Garland, Eric Zawadzki), set in a future where disease has been wiped out by gene therapy but instead given rise to powered-up people who are denied their humanity by the government.

If 41st century cyborg ronin are you bag then you are in luck this week, as the perfect book for you is being released by Valiant in the form of Rai #1 (Dan Abnett, Juan Jose Ryp). What would you do ig your favourite superhero appeared in real life, injured and in need of your help? That’s the questions Olympia (Curt Pires, Tony Pires, Alex Diotto, Dee Cunniffe) ask this week, as a new five part mini series kicks off from Image.

If you are looking for a longer indie read and fancy something a little creepy, older readers would do well to check out Babyteeth (Donny Cates, Garry Brown) vol. 3 continues the tale of Sadie Ritter and her hellspawn baby. Then there is the End of the F$$$ing World hardcover, and you can enter a world of magic in Excellence vol. 1 (Brandon Thomas, Khary Randolph), when a son defies his father to try to create a better future. Humanity is dying out and what is left isn’t that great for the survivors in The Wilds (Vita Ayala, Emily Pearson) a roadtrip survival tale that is released in trade form this week.

The first volume of the funny and exciting Sabrina The Teenage Witch (Kelly Thompson, Andy Fish, Jack Morelli, Veronica Fish) is relased this week, and you can head back to the trailer park this week and in to the world of Grass Kings vol. 2 (Matt Kindt, Tyler Jenkins), in which Roberts younger brothers start to question if he is still fit to lead. If you fancy something with more tentacles there is HP Lovecrafts At The Mountains Of Madness (Gou Tanabe) vol. 2, and who doesn’t like more tentacles?

Lumberjanes: The Shape of Friendship (Lilah Sturges, Polterink) is the latest OGN in the world of Jo, Mal, Molly, April, and Ripley, who this time out discover a group of magical creatures living in the woods!

Manga fans this week can check out Black Clover (Yuki Tabata) vol 18, in which the Black Bulls team need to risk their loves to turn Luck back from an elf! There is also My Hero Academia: Smash (Hirofumi Neda) a parody series that this time round covers the Sports Festival, internships and other fun stuff. Plus there is One Piece (Eiichiro Oda) vol. 92 is released this week, in which the Straw Hats are just starting to get their bearings in the mysterious samurai kingdom of Wano when Kaido makes his grand appearance as a flying dragon!