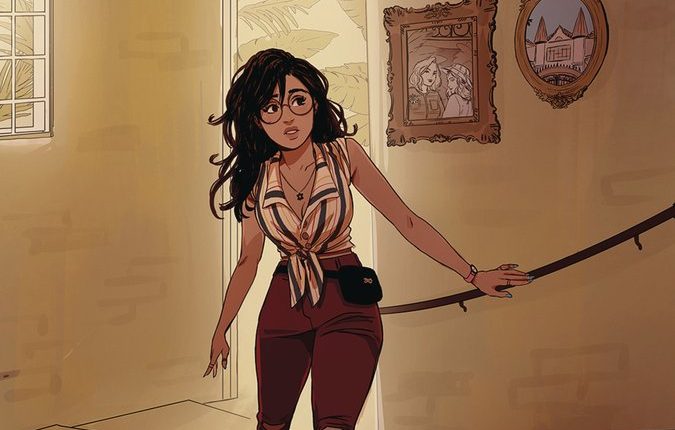 It’s another indie bonanza again this week, so let’s spend a bit of time looking at those before the big two.

It’s looking like Boom’s run of hits is set to continue with Folklords #1 -Eisner Award-nominated writer Matt Kindt (Grass Kings, Black Badge) teams with acclaimed artist Matt Smith (Hellboy And The B.P.R.D.) challenge everything you know about the line between fantasy and reality in a new series for fans of Die, Middlewest and Fables.

Black Stars Above #1 ( Lonnie Nadler, Jenna Cha ) from Vault has a young fur trapper fleeing her overbearing family only to get lost in a dreamlike winter wilderness that harbours a cosmic threat, and has been getting a huge amount of hype on them there interwebs.

Mirka Andolfo’s Unsacred #1, somewhat unsurprisingly from Mirka Andolfo (Unnatural, DC Bombshells) brings to life a Heaven (and a Hell) filled with humour and lovable characters! Angelina, a voluptuous angel, and Damiano, a mischievous devil, are madly in love. But, while she does not intend to give in to temptation, he would very much like to…  Family Tree #1 ( Jeff Lemire, Phil Hester, Ryan Cody, Eric Gapstur) tells the story of an eight-year-old girl that literally begins to transform into a tree. Her single mom, troubled brother, and possibly insane grandfather embark on a bizarre and heart-wrenching odyssey across the back roads of America in a desperate search for a way to cure her horrifying transformation before it’s too late, but this is Jeff Lemire so you know it won’t be plain sailing.

Elfquest: Stargazers #1 ( Wendy Pini, Richard Pini, Sonny Strait ) carries on the story of Skywise ina new six part mini-series, and Grendel: Devils Odyssey #1 (Matt Wagner) sees Grendel Prime searches the stars for a new home for mankind, and Matt Wagner returns to his darkest creation! As civilization comes to an end on Earth, the final Grendel Khan gives Grendel Prime a new directive: Find a perfect planet to be the new home for the human race. But will the deadly and relentless paladin ultimately save humanity… or destroy it?

If you fancy a longer read there is GLOW ( Tini Howard, Hannah Templer) volume 1, continuing the story of those Gorgeous Ladies of Wrestling, or there is Firefly: Sting ( Delilah S Dawson, various) which gives Browncoats a new tale about Saffron, as she tries to tempt the ladies of the ship away from Captain Reynolds to help her on a new heist.

If you are looking for a longer read this week there is Vision: Complete Collection (Tom King, Gabriel Hernandez Walta, Michael Walsh), which is a superhero tale like nothing you have ever seen before, when the titular hero tries to live a normal suburban life with his family and a dog…  What could possibly go wrong?

For fans of the classic tv show there is Adventures of the X-Men (Ralph Macchio, Andy Kuhn, Derec Aucoin, Yancy Labat), which has the same visual style but with all new action, and Savage Avengers (Gerry Duggan, Mike Deodato) collects together the biggest badasses in the Marvel universe, then throws Conan the Barbarian in to the mix for good measure!

DC are releasing a new style of Lantern comic this week in the form of ﻿Far Sector﻿ (N.K. Jemisin, Jamal Campbell) #1, a new maxi-series that features a galaxy spanning sci-fi space murder mystery!

For (much) older readers there is the next release from the new Hill House horror imprint, this week they are dropping a tale of a spooky toy house and it’s inhabitants, that want more than to just play, in The Dollhouse Family (Mike Carey, Joe Hill, Peter Gross, Vince Locke, Dan McDaid). From the same creators as last years wonderful Highest House, and featuring the continued serialisation of Joe Hoill’s Sea Dogs this should be a great read for horror fans.