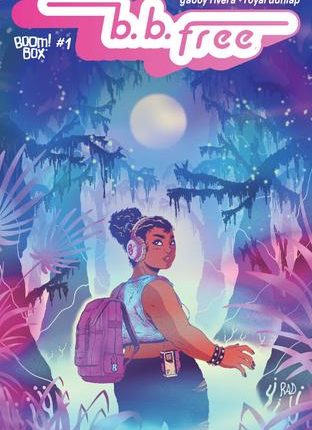 Buckle up ladies and gentleman, it’s a big week for new releases! There are some heavy-hitters coming out swinging this week, including Undiscovered Country #1 (Charles Soule, Scott Snyder, Giuseppe Camuncoli, Daniele Orlandini), set in a near-future in which the US walled itself off for over thirty years without explanation, only to be entered by a group of scientists seeking a cure for a worldwide pandemic. There is also a new edition to the hit soon-to-be-TV-series in the form of Locke and Key: Dog Days (Joe Hill, Gabriel Rodriguez), which includes two new short stories from the original creative team. Teenage rebellion crosses the ages in b.b.free #1 (Gabby Rivera, Royal Dunlap) a tale set a hundred years after half the population was wiped out, but fathers are still overbearing and you sometimes have to find your own family.

Xena meets Unforgiven in Crone #1 (Dennis Culver, Justin Greenwood) in which a former champion is called upon once more to return to a life of adventure, and you can join the original adventurers in Dungeons and Dragons: Baldur’s Gate (Jim Zub, Various) as they declare “go for the eyes” once more! If you are looking for a story of survival and rebellion in a post-apocalyptic landscape devoid of rock’n’roll then there is – somehow – *exactly* the book for you this week, as Kiss Zombies #1 (Ethan Sacks, Rodney Buchemi) sees the rock band take on hordes of the undead. Sticking with the undead, we also see Vengeance of Vampirella #1 (Tom Sniegoski, Michael Sta. Maria) hitting the racks, a special 50th anniversary celebration that harks back to the 1994 series of the same name.

Rick and Morty Present Unity #1 (Tini Howard, CJ Cannon) is new this week for fans of the show, and Wretches #1 (James E Roche, Salo Farias) sees the past catching up with a pair of sibling bounty hunters with everything to lose. There are new adaptations of popular fantasy series with Rivers of London: The Fey and The Furious #1 (Ben Aaronovitch, Andrew Cartmel, Lee Sullivan) – which let’s face it is worth buying for that title alone – and Shades of Magic: Rebel Army #1 (V.E Schwab, Andrea Olimpieri).

There is also a new Minions #1 (Stephane Lapuss, Renaud Collin) book. Because of course there is.

Explore the world of The Magicians (Lilah Sturges, Pius Bak) and welcome a new class of students to Brakebills – now with added hedge magicians! Following on from the Free Comic Book Day edition, Dragonfly and Dragonflyman #1 (Tom Peyer, Peter Krause) follows the eponymous heroes as they become trapped in each other’s realities, with consequences that they may not wish to face.  High jinx will no doubt ensue when a near-dead hitman bonds with an ancient creature in Voidwalker #1 (Spencer Desmond, Kristian Rossi), and things are coming over very Mad Max in Dog Eaters #1 (Malcolm Wong, Guillermo A. Angel). Also there’s an interesting how-to guide coming out this week, in the form of Heist: How To Steal A Planet (Paul Tobin, Arjuna Susini), which  is best described as Oceans Eleven in space!

Indie-wise on the trade front we seee the ever-controversial Man-Eaters vol. 3 (Chelsea Cain, Elise McCall, Lia Miternique) hitting shelves, which wraps up the series about teenage girls turning in to panthers to overthrow the patriarchy.  At over 500 pages, The Complete Elfquest vol. 6 (Wendy Pini, Richard Pini, Sonny Strait) collects long and short stories that fill in even more backstory than you could shake a stick at. Plus there is classic sci-fi feminism in the form of Barbarella vol. 3 (Mike Carey, Kenan Yarar), where Barb is out for revenge – if she can live that long! Speaking of ladies on the edge, we also seee Red Sonja: Scorched Earth (Mark James Russell, Mirko Colak) hitting shelves this week, a tale of world conquering, revenge, and the She-Devil of the Hyrkanian Steppes.

The much anticipated and seasonally titled November  #1 (Matt Fraction, Elsa Charretier) is a hardcover tale of three strangers connected by bad luck in a criminal underworld, while Isabellae vol. 2 (Raule, Gabor)  concludes the story of the sword-maiden battling Celtic beasts and deities in order to find her heritage. Set in the world of the latest movie series of Planet of the Apes: After The Fall Omnibus (Various) collects a whole swathe of Ape-centric books, and Bronze Age Boogie (Stuart Morgan, Alberto Ponticelli) combines all the best bits of 1970’s culture – apes, monsters, Kung Fu, sword-and-sorcery – in one comedy comic!

The official comic of the game returns with a second volume this week as Life Is Strange: Waves (Emma Vieceli, Andrea Izzo, Claudia Leonardi) hits the shelves to continue the stories of Max, Chloe and Rachel. Then there is the second volume of manga homage to gangster cinema Ryuko (Eldo Yoshimizu) hitting the racks this week, and The Source (Don Handfield, Joshua Malkin, Leno Carvalho) which claims to be based on true history, real legends, and actual folklore and myths, and is the story of a man prophesied to return magic to the world, while Amazons, Abolitionists and Activists (Mikki Kendall, Aster D’Amico) looks at actual history and is fascinating graphic novel-style primer that covers the key figures and events that have advanced women’s rights from antiquity to the modern era.

If you fancy a little primordial sludge in your funny books this week why not check out Erf (Garth Ennis, Rob Steen) about four amphibious friends who decide to venture out of the ocean for the first time, and for younger readers there is Bolivar Eats New York (Sean Rubin) in which the dinosaur that lives next door  goes on a mission to eat something other than corned beef sandwiches! Then we see Diary of a Wimpy Kid vol 14 (Jeff Kinney), and Steven Universe: Welcome to Beach City (Jeremy Sorese, Chrystin Garland, Coleman Engle, Grace Kraft, Sara Talmadge, Cara McGee, T. Zysk, Ayme Sotuyo) is a collection of short stories set in the world of the popular cartoon, and Animosity : Year Two (Marguerite Bennett, Rafael de Latorre) continues the hardcover collection of the story that asks the question “what would happen if animals gained consciousness” – spoiler: it doesn’t go well for humanity! The Midwinter Witch (Molly Knox Ostertag) finishes off the trilogy about Aster that started in The Witch Boy

The folks at DC have already forgotten about Halloween and are moving on to jollier pastures with DC Holiday Knightmares (Virtually everyone that has worked for DC this year) with a trio of seasonal stories featuring your favourite villains and heroes. Continuing on his mission to write every book in the history of DC, Legion of Superheroes #1 (Brian Michael Bendis, Ryan Sook), sees Bendis kick off with a new reader friendly tale of the 31st Century heroes who have gathered together to stop a galaxy from repeating the mistakes of the past.

What has Hal Jordan done? Comics writing royalty aim to answer this eternal question in Green Lantern: Black Stars #1 (Grant Morrison, Xermanico) that follows on from Green Lantern #12.  Speaking of continuations, the Year of the Villain continues on apace with Infected: King Shazam #1 (Sina Grace, Joe Bennett) in which Billy Batson turns bad! Then there is gen:Lock #1 (Collin Kelly, Jackson Lanzing, Carlo Barberi, Walden Wong) which sees a group of heroes take on Union as part of the Global Culture War – which probably makes sense if you have been watching the animated series that this spins out of!

The en masse publication of big name creators continues with the new DC Black Label edition Luthor (Brian Azzarello, Lee Bermejo), which asks the big question – why is Lex just so obsessed with the Man of Steel? Nightwing: Burnback (Dan Jurgens, Scott Lobdell, Zack Kaplan (A) Travis Moore, Chris Mooneyham, Ronan Cliquet) sees a veritable plethora of creators giving us the tale of Ric Grayson dealing with his gunshot wound, while Teen Titans Go! Giant #1 (Various) does exactly what it says on the tin, with 100 pages of comedy goodness. For teen readers – and fans of the hit CW show – there is Supergirl: Curse of the Ancients (Jo Whittemore) featuring a not-seen-on-tv adventure for Kara Danvers.

Not to be outdone, Marvel are bringing out their big creative guns too, releasing Fantastic Four: Prodigal Sun (Peter David, Francesco Manna) bringing together the first family, Silver Surfer and the Guardians of the Galaxy in one story! Then there is the Deadpool by Joe Kelly Complete Collection vol. 1 (Joe Kelly, Stan Lee, Aaron Lopresti, More, Ed McGuinness), presenting a character defining run on the Merc with a Mouth. There is also League of Legends: Lux (John O’Bryan, Billy Tan, Gadson, Haining).

If you are after a big read – or an early Christmas present – for a fan of the House of Ideas, you can’t go far wrong with The Official Handbook of the Marvel Universe (Mark Gruenwald, Peter Sanderson, More , Various, John Byrne) collected in a single hardcover volume for the first time since its release in the ‘80s. If you like it old school why not also check out some big name creators going prehistoric in Savage Sword of Conan: Marvel Years vol. 2 (Roy Thomas, John Buscema, Neal Adams, More).  For more modern fans, future comics superstars are taking on the wicked web-slinger in Venom (Donny Cates, Iban Coello, Ryan Stegman) hardcover.

Single issue wise, the Carnage event continues with Absolute Carnage: Weapon + (Jed McKay, Stefano Raffaele), and the mobile-game tie-ins are also back, this time with Future Fight Firsts: Crescent and Io (Alyssa Wong, Jon Lam, Ale Garza), a one shot that also features the Future Avengers in a new story.

The big names are also back this week – creator and character wise – with New Mutants #1 (Jonathan Hickman, Ed Brisson,  Rod Reis) which unties the classic team of Sunspot, Wolfsbane, Mirage, Karma, Magik, and Cypher with some new friends! Also from the x-universe this week is X-Force (Ben Percy, Joshua Cassara) which gives us the CIA of the mutant world with Jean Grey and Wolverine on the books.

It’s all going a little bit Freaky Friday in Spider-Man and Venom: Double Trouble #1 (Mariko Tamaki, Gurihuri), as the long-time enemies have to become best buddies to sort out their troubles when they accidentally get body-swapped! And finally Mary Poppins makes a welcome return to the world of comics, in Yondu #1 (Lonnie Nadler, Zac Thompson, John McCrea), the mercenary / bounty hunter that we all love to love!