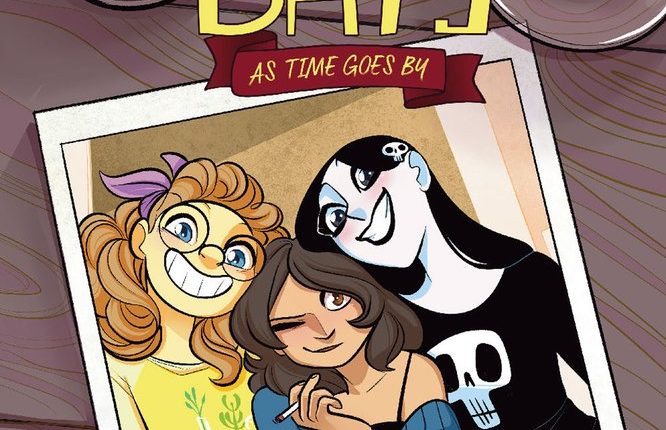 Welcome to a preview of everyone’s favourite day of the week – new comic book day! Sarah here with a run down of the new title hitting the shelves this week for all your Wednesday Warriors…

Single issue wise there is plenty for the indie fans this week, such as Giant Days: As Time Goes By (John Allison, Max Sarin) which picks up one year after graduation and will be the swansong for Esther, Daisy, Susan and friends.  Roku #1 (Cullen Bunn, Ramon Bachs) starting the tale of a globe-trotting assassin, Monster Planet #1 (Joe Brusha, Igor Vitorino) which a decimated mankind turn to the Lord of Vampires in it’s fight for survival.

Chrononauts: Futureshock # 1(Mark Millar, Eric Canete) sees the return of the time-travelling physicists, and Street Angel; Deadliest Girl Alive (Jim Rugg, Brian Maruca) is about a homeless ninja on a skateboard and honestly I can’t make that sound any cooler than it already is. Speaking of cool, Punk Mambo (Cullen Bunn, Adam Gorham) is the tale of a voodoo priestess turned mystical mercenary for hire.

Featuring a group of time-travelling monster hunters led by Van Helsing who take on the sinister forces led by murderer Elizabeth Bathory, Wolvenheart (Mark London, Alejandro Giraldo) is here to take you on an adventure through time and space, and capitalising on the Satanic Panic of the 80s is Warrior Nun Dora (Pat Shand, Daniel Gete),  about a girl sent away by her religious parents only to discover that she is now part of group of nuns fighting the forces of evil – reprinted to coincide with the release of a new Netflix series, this is no Dora the Explorer…

Adapted from the Newberry award winning novel is The Giver (P. Craig Russell, Lois Lowry), while a quiet night at a rundown Russian train station turns into an all-out demon battle for Hellboy when three sinister interlopers pass through in Hellboy and the BPRD: Long Night at Goloski Station (Mike Mignola, Matt Smith), and things stay scary in Dark Judges: Fall of Deadworld from 2000AD.

The tale of the Anarchists League of Scientists draws to a close in Black Science vol 9 (Rick Remender, Matteo Scalera), and revenge is on the cards in Amber Blake vol 1 (Jade Lagardére, Butch Guice). Meanwhile, Ryoku (Kagami Yoshimizu, Eldo Yoshimizu) is an homage to film noir and Japanese gangster cinema in the manga style, speaking of manga we also have The Legend of Zelda; A Link to the Past (Shotaro Ishinomori), based on the classic game of the same name, while Mini and the Wolves (Alabaster Pizzo) is an epic tale of affairs, alliances, and friendships in a quest for power and self-discovery.

Sisters – well princesses – are doing it for themselves in Courageous Princess: Beyond The Hundred Kingdoms (Rod Espinosa) while Blankets  (Craig Thompson) is a classic coming of age tale getting a fresh new printing.

Continuing their unending mission to make everything dark and gritty, DC this week release Tales from the Dark Multiverse: The Death of Superman (Jeff Loveness, Brad Walker, Andrew Hennessy) which sees Lois Lane take on the mantle of The Eradicator to exact revenge on those who allowed Superman to die. Plus there is the latest from DC Black Label / the Sandman Universe in the form of Hellblazer #1 (Si Spurrier, Marcio Takara) giving us the return of John Constantine.

The big release for DC this week however is Joker: Killer Smile (Jeff Lemire, Andrea Sorrentino) featuring two of comics biggest names taking on the Clown Prince of Crime in a new tale featuring Mr Smiles… Oh and Basketfull of Heads (Joe Hill (A) Leomacs) is the first comic from the new DC Hill House imprint; the story of June Branch, a young woman trapped with four cunning criminals who have snatched her boyfriend for deranged reasons of their own. Now she must fight for her life with the help of an enchanted 8th-century Viking axe that can pass through a man’s neck in a single swipe-and leave the severed head still conscious and capable of supernatural speech. Because of course.

DC Ghosts #1 (everyone ever) features nine spooky stories in an over-sized issue, Aquaman Giant #1 (also everyone) is an 100 page special, and Batman and the Outsiders Annual #1 (Bryan Hill, Max Raynor) sees the band of semi-heroes trying to give peace to the soul of Katana’s husband, trapped in her eponymous sword.

Finally DC seem to think Marvel were on to a good thing with Conan so have their own epic fantasy series kicking off this week in Last God #1 (Philip Kennedy Johnson, Ricardo Federici, Dean White, Jared Blando).

Continuing the month of new X-Men titles, this week we get the UK’s favourite team in   Excalibur #1 (Tini Howard, Marcus To) in which we find Captain Britain fighting for the Kingdom of Avalon with her Excalibur at her side – Rogue, Gambit, Rictor, Jubilee…and Apocalypse?! The solicit for Savage Avengers Annual #1 (Gerry Duggan ,Ron Garney) open with “a barbarian walks into a brothel” and really what more do you want to know about these tales of Conan, Black Widow and Daimon Hellstrom?

Norman Osborn has made some bad decisions in his time, not least deciding to merge himself with Carnage in order to give us Red Goblin: Red Death #1 (Patrick Gleason, Rob Fee, Sean Ryan, Pete Woods), and there’s undead horror for days in Marvel Zombies: Resurrection (Phillip Kennedy Johnson, Leonard Kirk). We take a trip into the Sanctum Santorum in the Doctor Strange Annual #1(Pornsak Pichetshote, Tini Howard, Andy MacDonald, Lalit Kumar Sharma)

Slightly cheerier is Marvel Action: Spider-Man: Spider-Chase (Erik Burnham, Christopher Jones) which sees the Spider-folks taking on Kraven the Hunter, and you can get your first family fix in Fantastic Four: Grand Design (Tom Scioli), an the Merc with a Mouth is back – again – in Deadpool: Weasel Goes To Hell (Skottie Young, Dana Schwartz, Scott Hepburn, Reilly Brown), the third volume of Skottie Young’s turn on the title. There is also an extra-helping of Norman Osborn this week with Amazing Spider-Man: Red Goblin (Dan Slott, Christos N. Gage, Stuart Immonen, Mike Hawthorne, more) bringing Dan Slott’s run on the book to an epic finish.

Welp, that just about covers all the new releases this week folks! Drop us a line on social media to let us know what you’re picking up and what you think we should be reading!